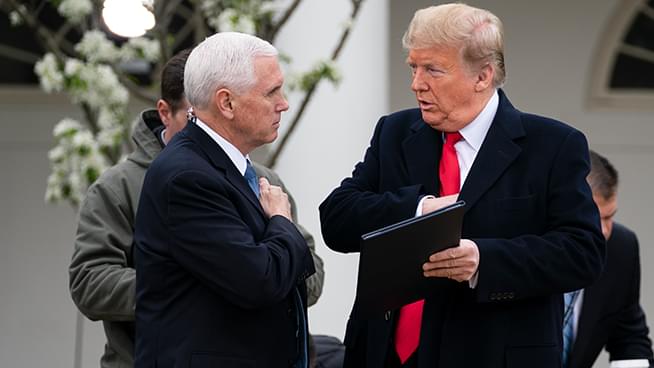 Trump says he intends to reopen country in weeks, not months

President Donald Trump says he wants to reopen the country for business in weeks, not months, and he claims, without evidence, that continued closures could result in more deaths than the coronavirus pandemic. Trump said Monday that “we have to open our country because that causes problems that, in my opinion, could be far bigger problems.” Trump acknowledged there are trade-offs but said that if closures stretch on for months, there would be “probably more death from that than anything that we’re talking about with respect to the virus.”

California is scrambling to obtain protective gear for healthcare workers and first responders, reaching out worldwide and working with locals to ratchet up production as the coronavirus outbreak sweeps through the nation’s most populous state. Gov. Gavin Newsom says California is looking at ways of acquiring some 1 billion sets of gloves, along with hundreds of millions of gowns, surgical masks and face shields. California has seen nearly 2,200 cases of COVID-19 and 40 deaths. Newsom says an expected three-month surge of cases will require some 50,000 additional hospital beds.

Texas’ lieutenant governor says US should get ‘back to work’

Texas’ lieutenant governor says the U.S. should get back to work in the face of a global pandemic and that people over the age of 70 will “take care of ourselves.” Republican Lt. Gov. Dan Patrick made the comments on Fox News’ “Tucker Carlson Tonight.” The Centers for Disease Control says people over the age of 65 are at higher risk from the coronavirus that causes the disease COVID-19.  Health experts have made clear that unless Americans continue to dramatically limit social interaction, the number of infections will overwhelm the health care system.

Asian stock markets gained Tuesday after the U.S. Federal Reserve promised support to the struggling economy as Congress delayed action on a $2 trillion coronavirus aid package.  Traders were encouraged by the Fed’s promise to buy as many assets as needed to keep financial markets functioning.

That came as Wall Street fell 3% after Congress failed to approve an economic support package. It would send checks to U.S. households and offer support for small businesses and the hard-hit travel industry, but Democrats say it favors companies too heavily at the expense of workers and public health.

Trading on the New York Stock Exchange went all-electronic on Monday for the first time after the trading floor was temporarily closed as a precaution. The exchange announced the move last week after two employees tested positive for the virus.

Wall Street and some other stock markets have lost nearly one-third of their value over the past month as business shutdowns spread and airlines, retailers and other industries suffer rising losses.

Top congressional and White House officials negotiating the nearly $2 trillion coronavirus rescue package say they expect to reach a deal sometime Tuesday. Treasury Secretary Steven Mnuchin and Senate Democratic leader Chuck Schumer say they spoke by phone with President Trump as they met late into the night at the Capitol. While the two sides have resolved many issues in the sweeping package, some disagreements remain. Washington has been straining to respond to the worsening coronavirus outbreak, and tempers in Congress have flared at times.

China to lift lockdown in most of virus-hit Hubei province

Chinese authorities are lifting a lockdown in most of its virus-hit Hubei province. People who are cleared will be able to leave the province after midnight Tuesday. The city of Wuhan, where the outbreak started, will remain locked down until April 8. China barred people from leaving or entering Wuhan starting Jan. 23 and expanded it to most of the province in succeeding days. The drastic steps came as a new coronavirus began spreading to the rest of China and overseas during the Lunar New Year when much Chinese travel. Hubei has seen almost no new infections for more than a week.

The closure of Mount Everest will have significant financial ramifications for the local Sherpas, cooks, porters and others who make their living during the short climbing window. It also affects the clients who paid big money and expedition guides who are still on the hook for expenses. They all agree it was the right decision in light of the coronavirus pandemic. By shutting down the passage through the south route of Everest, the Nepal government stands to lose some $4 million in permits alone. There are thousands of people who depend on the money spent by climbers in Nepal.

Torch relay begins, even as the possibility of Games delay

The Tokyo Olympic torch relay will start Thursday as planned in northeastern Japan’s Fukushima prefecture – but with no torch, no torchbearers, no public, and little ceremony.

There will be an Olympic flame – that arrived on March 12 from Greece – carried in a lantern and transported by a vehicle along what organizers hope will be empty roadsides, and with curious onlookers practicing social distancing to avoid spreading the coronavirus.

The Games are set to open in July, but there has been growing pressure for a postponement.

In other Olympic developments: