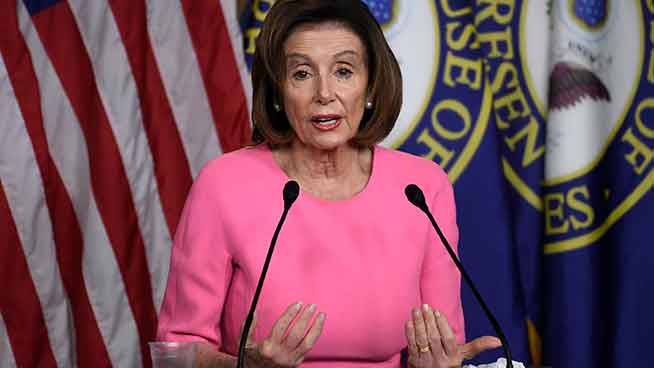 Pelosi spoke to reporters at the Capitol on Thursday a day after the Senate unanimously approved the measure.

The Senate passed a mammoth $2.2 trillion economic rescue package steering aid to businesses, workers and health care systems engulfed by the coronavirus pandemic, an unprecedented response amid record new jobless claims and mounting evidence that the economy is in a recession.

The unanimous Senate vote late Wednesday came despite misgivings on both sides about whether it goes too far or not far enough and capped days of difficult negotiations as Washington confronted a national challenge unlike it has ever faced.

Nearly 3.3 million Americans applied for unemployment benefits last week – more than quadruple the previous record set in 1982 – amid a widespread economic shutdown caused by the coronavirus.

The surge in weekly applications was a stunning reflection of the damage the viral outbreak is doing to the economy. Filings for unemployment aid generally reflect the pace of layoffs.

The pace of layoffs is sure to accelerate as the U.S. economy sinks into a recession. Revenue has collapsed at restaurants, hotels, movie theaters, gyms, and airlines. Auto sales are plummeting, and car makers have close factories. Most such employers face loan payments and other fixed costs, so they’re cutting jobs to save money.

Italy has reported 6,153 new coronavirus infections, pushing the global total over half a million, based on a count kept by Johns Hopkins University.

Italy now has 80,539 cases, almost as many as China. Italy’s Civil Protection Agency reported 662 deaths on Thursday, bringing the country’s death toll to 8,165, which is the highest in the world.

Rapid increase in coronavirus cases aboard US aircraft carrier

Earlier in the day, acting Navy Secretary Thomas Modly had said there were “several” more cases onboard the ship, but did not give a specific number.

“We are in the process now of testing 100% of the crew of that ship to ensure that we’re able to contain whatever spread might’ve occurred,” Modly told reporters at the Pentagon at a briefing Thursday morning. There are approximately 5,000 personnel on board the carrier.

COVID-19 infections rise in New York with peak weeks away

New York Gov. Andrew Cuomo says the number of people hospitalized with COVID-19 in the state has climbed to 3,800, with close to 900 in intensive care. New York officials are keeping a close eye on already-stressed hospitals as the number of cases is projected to rise for perhaps three more weeks. Cuomo said Wednesday that as many as 140,000 hospital beds may be needed in a state with 53,000. The state has more than 30,000 confirmed cases and 285 deaths.

California Gov. Gavin Newsom says five of the nation’s largest banks have agreed to temporarily suspend residential mortgage payments for those affected by the coronavirus.  Newsom says Wells Fargo, US Bank, Citi and JP Morgan Chase have agreed to delay mortgage payments for 90 days. Bank of America has agreed to a one-month deferment that could be extended.   More than 1 million Californians have filed for unemployment benefits since March 13.

Go into most US emergency rooms, and you’ll find staff wear Crocs. Now their manufacturer has announced a program to donate 10,000 a day to healthcare workers fighting against the novel coronavirus.

“Over the past week, we have spoken to healthcare workers, their facilities and even their family and friends, and they have specifically asked for our shoes in an effort to provide ease on their feet, as well as ease of mind as they need the ability to easily clean up before they go home to their families,” said Crocs CEO Andrew Rees.

Crocs (CROX) are made out of a rubber-like molded polymer resin. They are waterproof and can be easily washed off, which is an advantage as people take special precautions because of the spread of the coronavirus.

Crocs said it is delivering some shipments straight to hospitals and other facilities, but that it is allowing workers to sign up for the free shoes by going to www.crocs.com/freeforhealthcare. It said it will continue to donate the shoes as long as supplies last.

The Golden Globes will accept movies submissions without a theatrical release for the first time due to the coronavirus pandemic. The Hollywood Foreign Press Association says Thursday films that are first released on television or a streaming service will be eligible for January’s Globes.

Usually, the Globes mandate that a film play for a week in an Los Angeles theater or on pay-per-view, as well as have an official screening for its voting members. The press association says the eligibility change was temporary. The Academy Motion Pictures Arts and Sciences, which bestows the Oscars, have yet to announce a similar move.

Ford, Fiat Chrysler, Honda and Toyota took steps Thursday to restart North American factories that have been closed to protect workers from the coronavirus.

The plants would reopen in early or mid-April, restoring the largest source of cash for automakers that generally book revenue when they ship vehicles to dealerships.

Auto companies, like other businesses, are trying to manage their way through the coronavirus crisis, which has forced factories to close amid employee concerns that they could catch the virus while working close to others at factory work stations.

Sweet: Peeps production stops, but Easter is taken care of

No more Peeps are being hatched for at least a couple of weeks — but it shouldn’t affect Easter baskets.

The Bethlehem, Pennsylvania-based Just Born confections company said its production facilities there and in Philadelphia closed Wednesday through April 7. But the company says it had already produced and shipped the Easter supply of its signature marshmallow confection to outlets. Just Born says the popular Peeps & Company retail store in Center Valley, Pennsylvania, is also closed for now.

The store is billed as a Peeps “experience” and features light displays, historical videos and merchandise. The company also makes other candies, including Mike and Ikes and Goldenberg’s Peanut Chews.

Just Born officials say that inventories of those candies had been shipped prior to the production stoppage, but that they might be in short supply at some retailers.