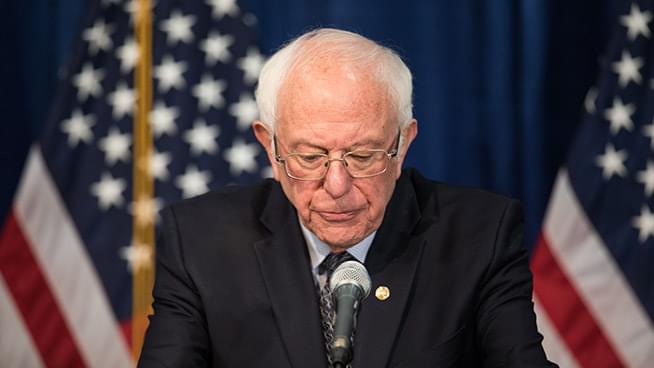 According to USA Today, Sanders’ decision comes after a string of losses to Biden in the primary election. The intensifying coronavirus pandemic also meant he could no longer hold the large rallies that came to define his grassroots movement, though he often pointed to the problems many Americans had getting tested and treated for the virus as evidence that the country needed to adopt his signature Medicare for All proposal.

On a livestream Sanders hosted Wednesday, he stated, “I wish I could give you better news, but I think you know the truth, and that is that we are now some 300 delegates behind Vice President Biden, and the path toward victory is virtually impossible…So while we are winning the ideological battle and while we are winning the support of so many young people and working people throughout the country, I have concluded that this battle for the Democratic nomination will not be successful. And so today I am announcing the suspension of my campaign.”

As Sanders livestream continued he vowed to keep pushing for issues he campaigned for and in his full statement to supporters Sanders said, “Together, standing united, we will go forward to defeat Donald Trump, the most dangerous president in modern American history. And we will fight to elect strong progressives at every level of government from Congress to the school board.”

Sanders ended his statement on a positive note encouraging people to stand together and support Biden to come together and better our nation explaining, “As I hope all of you know, this race has never been about me. I ran for the presidency because I believe that as a president, I could accelerate and institutionalize the progressive changes that we are all building together. And if we keep organizing and fighting, I have no doubt that that is exactly what will happen. While the path may be slower now, we will change this nation, and with like-minded friends around the globe, change the entire world.”

Sanders also stated he will remain on the ballet in states that have not had the primary election yet to gain delegates for the Democratic Party. Many people have sent out messages congratulating Sanders on his race thus far including his former competitor Biden. Vice President Joe Biden will take on President Donald Trump this November for the 2020 presidential race.

Today I am suspending my campaign. But while the campaign ends, the struggle for justice continues on. https://t.co/MYc7kt2b16