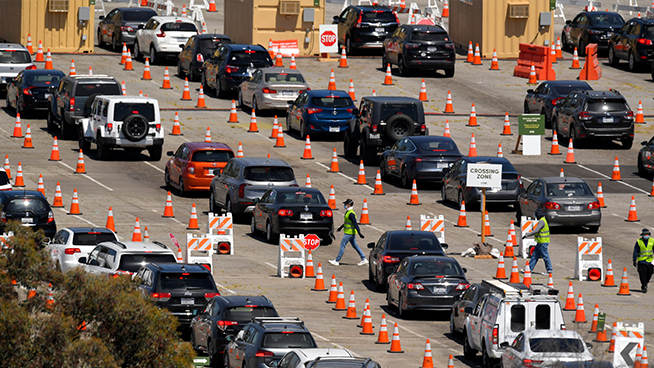 In this July 14, 2020 file photo, people wait in line for coronavirus testing at Dodger Stadium in Los Angeles. A similar setup will be erected to prepare Southern California for several new COVID-19 mass vaccination sites.

Monday yielded some great news as California Governor Gavin Newsom announced several mass vaccination sites would open up in Southern California, the area most affected by COVID-19. Though the announcement had some wondering in the Bay Area, “why not here?”

“Where are San Francisco or Bay Area’s mass vaccination sites?” Haney Tweeted in response to the new Dodgers Stadium, Padres Stadium, and CalExpo vaccination site announcements by the Governor. “SF Department of Public Health says they are ‘not tasked w widespread distribution across the entire City.’ Ok, then who is?” Tomorrow I am calling for a public hearing and an actual plan to answer these questions.”

Where are San Francisco or Bay Area's mass vaccination sites?

SF Department of Public Health says they are "not tasked w widespread distribution across the entire City." Ok, then who is?

Tomorrow I am calling for a public hearing and an actual plan to answer these questions. https://t.co/wbEOfI1Rbe

London Breed late last week, while answering questions about vaccine availability, made it clear that State and Federal organizations are the gatekeepers in this scenario and that most people will end up getting their vaccine through their health care providers.

“Please understand Department of Public Health can and will help however they can, but they are not tasked with widespread distribution across the entire City,” Breed explained.

This point did not sit well with Haney, who cited concerns over transparency and efficiency.

Respectfully I do not support this position.

DPH absolutely must take responsibility for the mass distribution of this vaccine.

Deferring to private providers who have neither the capacity nor interest for mass distribution is the wrong approach.https://t.co/x8dhAflnbi

Haney’s suggestion? Set up mass vaccination sites and get local hospital partners like UCSF to help as well. The Supervisor is worried that relying on private providers is a “recipe for disaster,” and that we need a centralized effort to ensure speed, urgency, and transparency. He wants to use what the city has learned about its massive drive-through testing sites and implement similar logistics to get vaccines in arms, especially to the disproportionately affected Latino community.

Haney says he sees the city inoculating at least 5,000 residents a day if local leaders can convene with other Bay Area experts. The city has previously used Oracle Arena and Kezar Stadium for mass testing and the city’s supervisor says these would be perfect spots for potential vaccination sites.

“We have the hospitals, we have the space, we have the vaccines,” Haney tweeted. “But it isn’t happening because DPH is saying ‘we don’t do mass distribution,’ go ask Kaiser when you might maybe get your dose. Come on.”

Several Doctors at UCSF have already reached out to Haney wanting to talk about how to best implement mass vaccination sites in the Bay Area. Though those experts are already warning that inoculation on this scale could be hindered by the state’s current tier system.

“We all need to come together now to make this happen ASAP!” said UCSF Anesthesiologist in a tweet. “Phase 1A should be done this week. Phase 1B as soon as this weekend will be a massive endeavor. SF DPH please let the city know what the needs are … we have amazing resources that can be mobilized!”

“May I send you a proposal about this to present?” messaged UCSF infectious diseases doctor, Monica Gandhi MD, MPH. “We would have to respectfully ask the California DPH if we could please waive the tier system since that is slowing things down. SF could be the first county to show the feasibility of mass vaccination approach.”

“I know that Dr. Gandhi has been saying this for weeks. Now is the time to MAKE. IT. HAPPEN.” the Supervisor tweeted agreeing with UCSF staff’s urgency.