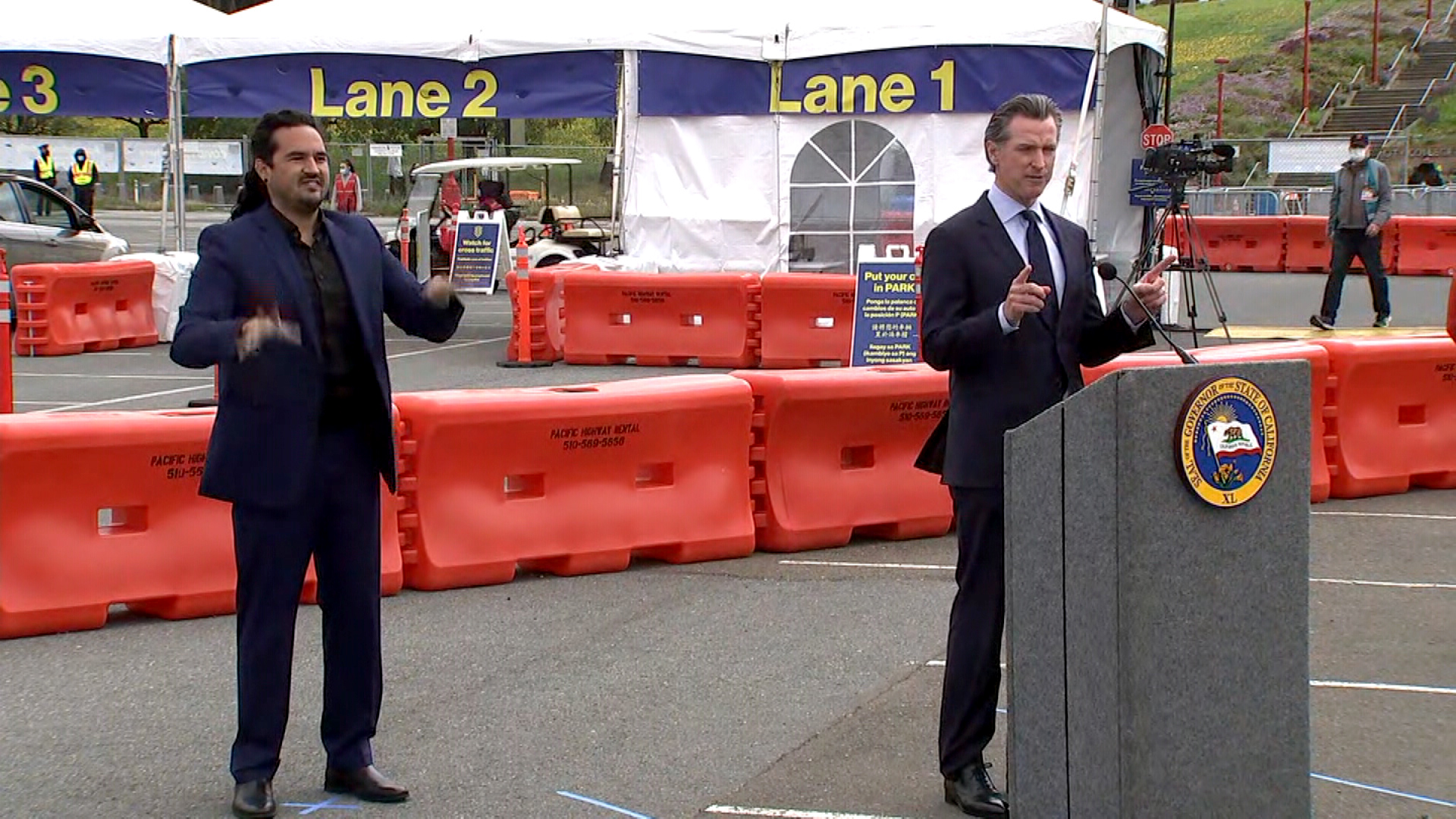 California’s mask mandate, however, would remain in place at least “in the short run,” Gov. Gavin Newsom said.

The state’s return to normal is subject to ongoing mask wearing and ongoing vigilance, Newsom said, along with a continued supply of vaccines.

“Looking 10 weeks out,” Newsom said, “our expectation is … everybody that would want the vaccine will have the opportunity to receive a vaccine.”

California’s announcement comes as some health experts have asked states to delay reopening so that more people can be vaccinated to fight off the spread of more-contagious variants, which they say is contributing to rising cases in parts of the US.

Dr. Seema Yasmin, an epidemiologist and CNN medical analyst, noted that California is waiting — more than two months — before fully reopening and that any sour circumstances before then still could change the state’s plans.

“We have to really make sure that we don’t drop our guard down,” Yasmin told CNN on Tuesday.

As part of the June 15 reopening, Ghaly said, California will abandon its four-tier system that helps determine how open a county could be based on metrics like case rates and positivity rates.

Ghaly, too, said the date could be adjusted.

“We’re looking at the supply and availability of vaccines. If the supply isn’t there, we may make some tweaks to that June 15 date,” he said, adding that “necessary precautions” would also be taken if Covid-19 hospitalizations rise.

Health officials will use science and data to guide the reopening, and variants will be closely monitored, Ghaly said.

Cases in California are down sharply from the winter, though the decline has leveled off in recent weeks.

The state averaged more than 2,700 new cases over the last week — roughly the same average from two weeks ago, but way below a peak average of about 46,000 new daily cases back on December 21, Johns Hopkins University data show.

Newsom boasted Monday that California has the lowest Covid-19 positivity rate in the nation at 1.7%, far from its peak of 17.1% in early January.

The US test positivity rate averaged 5.71% over the seven days, as of Saturday, US Health and Human Services data show. The World Health Organization last year advised governments not to reopen until test positivity rates were 5% or lower for at least 14 days.

California has no plan to impose a vaccine passport plan system, but some sectors, such as large conventions with more than 5,000 people, will be required to demonstrate that all attendees are either vaccinated or tested, officials said. That restriction will remain in place until October 1.

President Joe Biden planned to announce Tuesday that he is moving up his deadline for states to make all American adults eligible for a vaccine to April 19, instead of the previous May 1 goal, according to an administration official.

By Monday night, most states already had planned to open eligibility to everyone 16 and older by April 19. One of the few remaining states that hadn’t, Oregon, said Tuesday it would do so on April 19.

Some states have begun making plans for a return to normalcy.

In Washington, DC, Mayor Muriel Bowser is calling for residents to get vaccinated as soon as they have the chance. She is also loosening many restrictions beginning May 1, including allowing seated live entertainment indoors at 25% capacity, and recreation centers, libraries, museums and galleries and non-essential retail will be able to operate with 50% capacity indoors or outdoors.

“We know that we can expect to see some increases in cases this month, but with vaccinations and continued safeguards we expect that later in the spring that those cases will come down,” the mayor said Monday, before reminding residents to “get vaccinated as soon as you have the opportunity.”

Bowser is one of many local and state leaders to ease restrictions, though holding on to precautions is still a crucial part of the fight against the virus, Dr. Ashish Jha, dean of Brown University School of Public Health, told CNN’s Wolf Blitzer.

“We’re not there yet and the variants make it particularly concerning,” Jha said. “We really do have to hunker down for a few more weeks. We are very close to the finish line but we can’t stop yet.”

The daily rate of new coronavirus cases generally rose over the last four weeks, and part of that is due to the spread of highly transmissible variants like B.1.1.7, Dr. Rochelle Walensky, director of the US Centers for Disease Control and Prevention, said this week.

The US has averaged more than 64,600 new coronavirus cases a day over the last week — slightly lower than the previous week, but still about 17% higher than two weeks ago, and 12% higher than four weeks ago, according to data from Johns Hopkins University.

Cases have particularly jumped in Michigan: The state Monday reported its highest daily case count since November, with more than 11,000, according to Johns Hopkins. Just eight weeks ago, cases were as low as 563 in a day.

And across the state, at least 81 new clusters have been reported in K-12 schools, according to data released by the Michigan Department of Health and Human Services.

In Ohio, a rise in the positivity rate has sent the state to a “back to basics, common sense” order on Covid-19 prevention, Gov. Mike DeWine said.

The new, “simplified” order, which should be ready for signing by the end of Monday, includes wearing masks at most indoor locations, avoiding congregating in groups larger than 10 people and maintaining social distancing.

“It truly, truly is a race,” DeWine said. “These are the things that we need to do as we move forward.”

Dangerous Covid-19 variant has spread to all 50 US states.

The highly contagious Covid-19 variant first identified in the UK, meanwhile, has been reported in every state in the US, and experts say they’re concerned spreading variants could send cases surging.

More than 15,000 cases of the B.1.1.7 coronavirus variant, which also appears to be more deadly, have been reported in the US.

The good news is that existing vaccines are very effective against the variants, Dr. Michael Osterholm, director for the Center for Infectious Disease Research and Policy at the University of Minnesota, said Monday evening.

The bad news is that the US may not be able to administer them fast enough to avoid another surge.

“We are not going to have enough vaccines, the way we are going, into the arms of enough Americans over the course of the next six to 10 weeks with this surge that we are going to stop it,” Osterholm told CNN’s Erin Burnett.

And though the US is vaccinating nearly five times faster than the global average, with 40% of adults having received at least one shot, lower income countries with limited vaccine access could become a site for variants to spin out of control, Osterholm said.

Fortunately, the US has conditions that could help combat another surge: increased vaccination rates, a significant percentage of the population having already been infected and warming weather, Dr. Paul Offit, a member of the FDA Vaccines Advisory Committee, said Monday.

The percentage of Americans who reported seeing family or friends in the last week — 55% — has reached a pandemic high, according to a poll released Tuesday by Axios-Ipsos.

Forty-five percent of respondents reported going out to eat in the last week, and 37% visited a park, beach or outdoor space, according to the poll, which was conducted April 2-5, and made up of a nationally representative sample of 979 Americans ages 18 and older.

The perceived risk of regular activities declined from previous polls, with 55% of respondents saying that returning to pre-coronavirus life is a moderate or large risk — the lowest level since April. The percentage of respondents who consider attending a sporting event as risky dropped to 69%, from 79% in September.

More than two-thirds — 71% — view traveling by plane or mass transit as risky, down from 80% in February. Thirty-seven percent thought that this was a large risk, which is down from 73% in April.