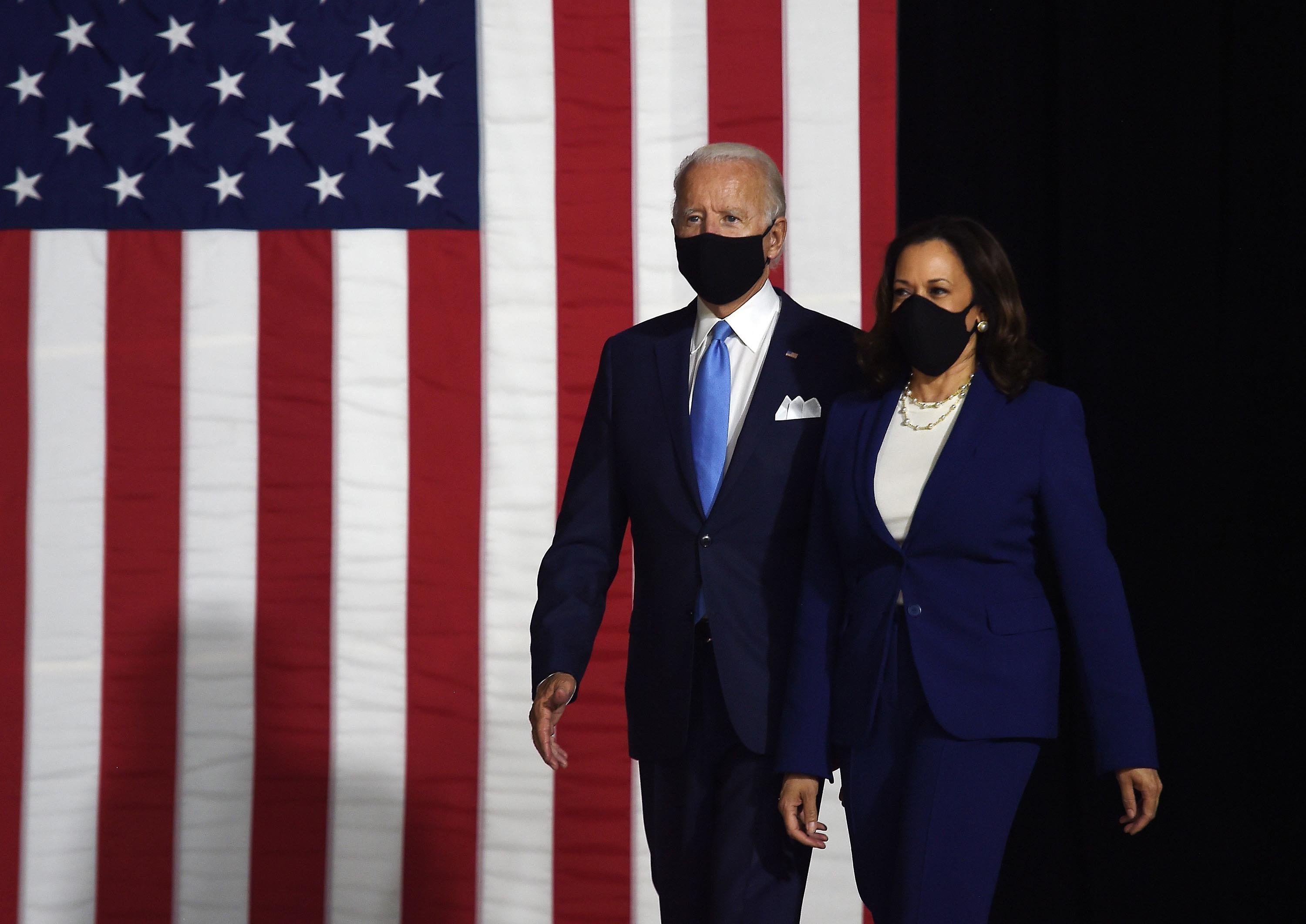 Sen. Kamala Harris laid out the Democratic case against President Donald Trump in her first speech as Joe Biden‘s running mate Wednesday, arguing that Trump isn’t “up to the job.”

Harris and Biden appeared together for the first time in Delaware, the day after Biden chose the California Democrat as his running mate, making history as the first Black woman and first person of Indian descent to join a major political party’s ticket.

“He inherited the longest economic expansion in history from Barack Obama and Joe Biden. And then, like everything else he inherited, he ran it straight into the ground,” she said of Trump.

“This is what happens when we elect a guy who just isn’t up for the job,” Harris said. “Our country ends in tatters and so does our reputation around the world.”

The two speeches — first Biden, then Harris — served as introductions to the new Democratic ticket. But they also offered a preview of how Biden, Harris and their surrogates will attack Trump and Vice President Mike Pence’s time in office during next week’s virtual Democratic National Convention and in the sprint to November’s general election that follows.

“Who are we as a nation?” Biden said. “What do we stand for? And most importantly, what do we want to be?”

In his speech, Biden said he’d first learned about Harris through her relationship with Beau Biden, who died of brain cancer in 2015.

“Kamala, you’ve been an honorary Biden for quite some time,” he said as he introduced Harris.

“I learned quickly that Beau was the kind of guy who inspires people to be a better version of themselves. He really was the best of us. And I would ask him, where’d you get that, where’d this come from, he’d always talk about his dad,” she said. “The love that they shared was incredible to watch. It was the most beautiful display between a father and a son.”

Their comments underscored that both candidates — publicly, at least — have put behind them Harris’ attack on Biden over his record on busing to desegregate schools in a June 2019 Democratic presidential debate.

Biden said that with Harris now on the Democratic ticket, “Little Black and brown girls, who so often feel overlooked and undervalued in their communities, but today, just maybe they’re seeing themselves for the first time in a new way.”

Biden began his speech in Wilmington by thanking other women his campaign vetted for the vice presidential pick, before he chose Harris — the daughter of Indian and Jamaican immigrants — on Tuesday.

“As a child of immigrants, she knows personally how immigrant families enrich our country,” he said. “Her story is America’s story.”

Biden also lambasted Trump for immediately referring Tuesday to Harris as “nasty,” a term Trump has directed at other women in the past.

“Is anyone surprised Donald Trump has a problem with a strong woman, or strong women across the board?” Biden said.

He added: “Kamala Harris has had your back and now, we have to have her back. She’s going to stand with me in this campaign, and all of us are going to stand up for her.”

Wednesday was the first day Biden and Harris campaigned together in person. After Biden offered Harris the vice presidential spot on the Democratic ticket on Tuesday, Harris traveled to Delaware on Wednesday. Biden, Harris and their spouses Jill Biden and Doug Emhoff met at Biden’s house before the speech, and were seen leaving for the venue in Wilmington in separate SUVs.

Biden joked that Emhoff, too, would have to adjust to his historic status as — if Biden and Harris win — “America’s first second gentleman.”

It’s not yet clear whether they’ll be able to continue to campaign together, with the coronavirus pandemic limiting Biden’s ability to hold events since mid-March.

Next week’s Democratic National Convention would ordinarily kick off a frenetic two-and-a-half month sprint to the November 3 election, but the pandemic has limited Biden to socially distanced events with small crowds. He spent July delivering weekly speeches detailing planks of his economic agenda.

After the speech, Biden and Harris are set to appear together at an online fundraiser for “grassroots” small-dollar donors on Wednesday night.

Asked by CNN if the two would campaign together, Biden said after their speeches Wednesday that “if the science allows us, you’re gonna see us campaigning together.”