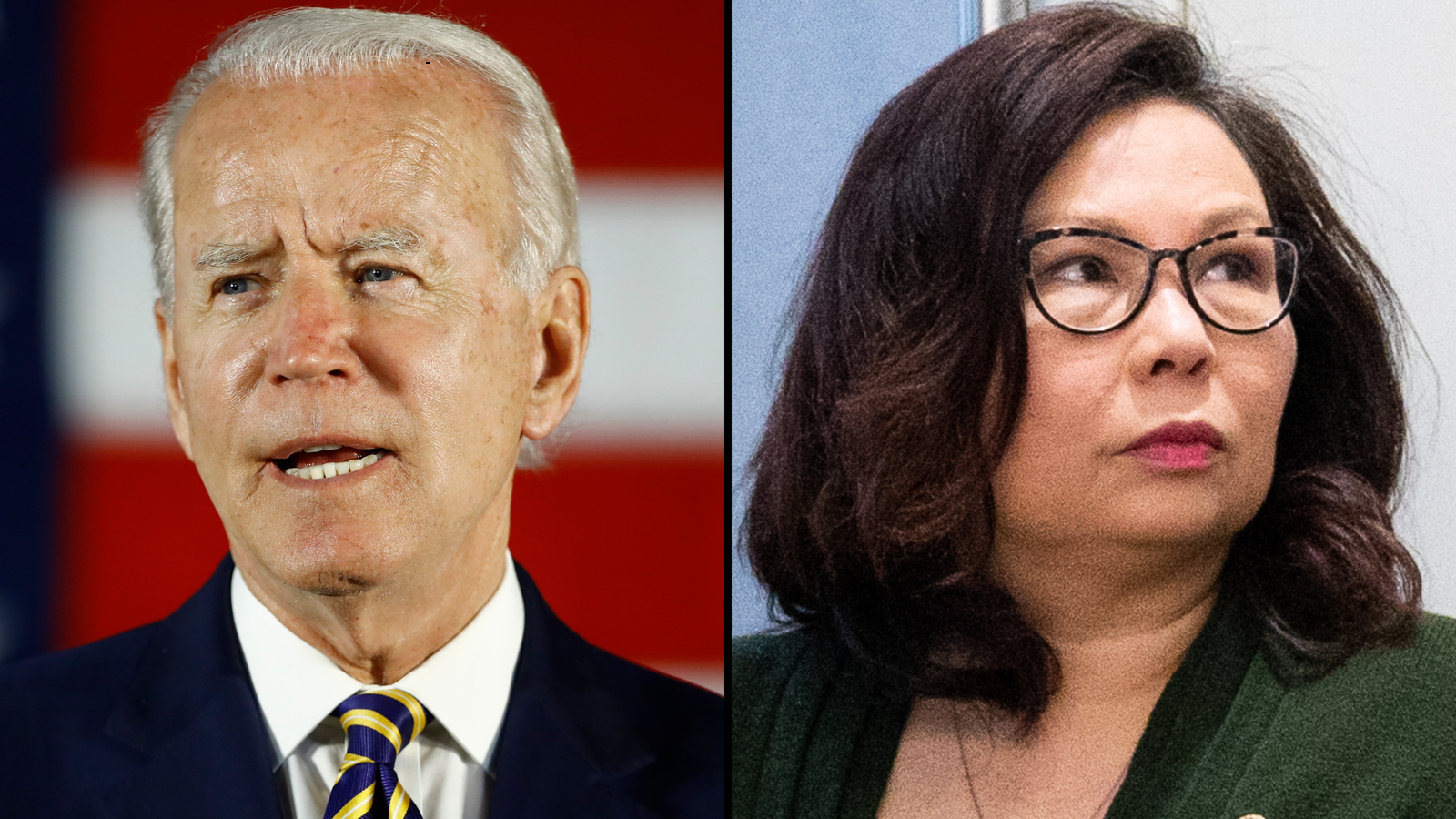 Joe Biden on Tuesday defended Sen. Tammy Duckworth, an Iraq War veteran who is considered to be a top vice presidential candidate, after her patriotism was recently questioned by President Donald Trump’s campaign and leading conservative commentator Tucker Carlson.

Duckworth, an Illinois Democrat, was awarded the Purple Heart after she lost her legs in 2004 when a rocket-propelled grenade hit the helicopter she was co-piloting during the Iraq War. She eventually retired from the Illinois Army National Guard as a lieutenant colonel.

“I can’t tell you how I felt today when I heard the President of the United States, Donald Trump, questioning your patriotism,” Biden said to Duckworth during a fundraiser Tuesday night, according to a pool report, though it was actually a statement from the Trump campaign that said Duckworth was using her military service to deflect from other issues.

“I found it virtually disgusting, sickening. I know you can handle yourself. I said, ‘I’m glad I wasn’t standing next to him,’ ” continued Biden, the presumptive Democratic presidential nominee, adding that “it’s a reflection of the depravity of what’s going on in the White House right now.”

Courtney Parella, deputy national press secretary for the Trump campaign, told CNN in a statement that “clearly, Joe Biden is confused again,” adding: Perhaps he meant to say that Senator Duckworth’s mischaracterization of the President and her comments to delegitimize American history were disgusting and sickening.”

Parella did not comment on whether Trump himself shares his campaign’s view.

Some conservatives have seized on comments made by Duckworth to CNN over the weekend in which she suggested there should be a “national dialogue” about whether statues of former slave-owning Presidents George Washington and Thomas Jefferson should be taken down. Carlson, Fox News’ highest-rated host, pointed to the comments as evidence she is among Democrats who purportedly “hate America” and has called her a “coward,” “fraud” and a “callous hack.” He also characterized her military sacrifice by saying she was “once injured while serving in the Illinois National Guard.”

The Trump campaign on Tuesday echoed that line of attack, though it used less incendiary language in a statement.

“After saying she was open to tearing down statues of George Washington, Tammy Duckworth is now using her military service to deflect from her support for the left-wing campaign to villainize America’s founding,” the campaign said in a statement issued by Veterans For Trump Co-Chair Scott O’Grady and Medal of Honor recipient and retired Army Gen. Patrick Brady. “If she can’t defend George Washington, our first Commander-in-Chief, those of us who still respect our Founding Fathers’ immense sacrifice and think America is worth fighting for will hold her accountable for cowering to the far-left fascists in the Democrat Party.”

Biden’s remarks are especially notable as Duckworth is among the broad tier of those being vetted by the former vice president’s campaign to be his running mate. Biden has said he will choose a woman, and he has been under increased pressure to pick someone of color in light of the recent national debate about race in America.

On Sunday, Duckworth, who is Thai American, passed when asked by CNN’s Dana Bash on “State of the Union” whether Biden should pick a Black woman for the position.

“The Biden campaign have their own process that they’re going through. And I’m sure Vice President Biden will pick the right person to be next to him as he digs this country out of the mess that Donald Trump has put us in,” Duckworth said.

Duckworth responded to the Trump campaign’s criticism on Tuesday, tweeting from her US Senate campaign account that “my family fought for our nation’s independence alongside George Washington” and that she was “a proud member” of the Daughters of the American Revolution.

She also tweeted at Trump to “focus on ending #COVID19 & standing up to Putin instead of wasting time trying to distract people from your failures.”

Duckworth has also pushed back on Carlson’s smears, highlighting her physical sacrifices made while serving the country.

“Does @TuckerCarlson want to walk a mile in my legs and then tell me whether or not I love America?” Duckworth tweeted from her Senate account on Monday.

This story has been updated with additional comments from Sen. Tammy Duckworth and the Trump campaign.