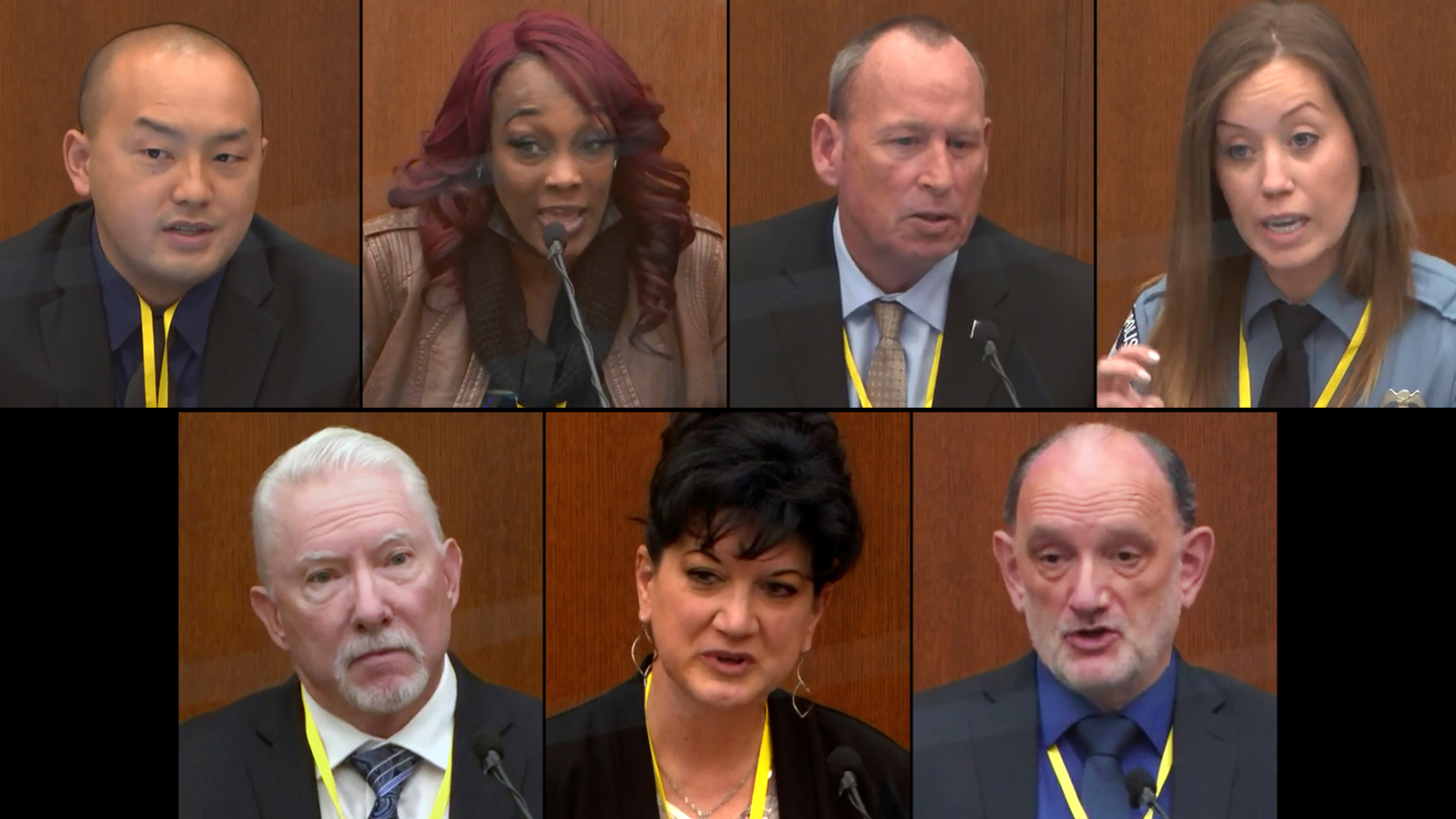 When closing arguments are delivered Monday in the trial of Derek Chauvin in the death of George Floyd, jurors will have sat through the testimony of seven witnesses for the defense and 38 for the prosecution.

But the jury did not hear from the former Minneapolis police officer, who on Thursday removed his face covering to invoke his Fifth Amendment right not to testify.

Chauvin told the judge — before the jury returned to the courtroom — that it was his decision and his decision alone. It was one of the rare times the public heard from the ex-cop, who didn’t display any emotion as he scribbled on a notepad during nearly three weeks of testimony.

“If you were to try to think about all the different ways in which he could answer the question that’s burning on the jury’s mind … Why didn’t you just get off of George Floyd’s neck? Why didn’t you render aid?” CNN senior legal analyst Laura Coates said of the defendant.

“Remember, all of his potential responses will actually be the opposite of the testimony they’ve already seen — from law enforcement experts, from his own police chief, from experts who talk about the notion to have to render aid even if somebody is in your custody.”

Still, Coates added, that Chauvin “essentially was his last and best and perhaps only hope” to confront the “mountain of evidence” against him.

“Of offering an explanation, if not, a justification for what he did, which could be enough to plant some — not only seed of reasonable doubt in a juror’s mind — but some seed of empathy,” she said.

After Chauvin invoked the Fifth, the defense rested its case in the closely watched trial. The jury will be sequestered during deliberations next week.

“If I were you, I would plan for long and hope for short,” Judge Peter Cahill told jurors. “Basically, it’s up to the jury how long you deliberate, how long you need to come to a unanimous decision on any count.”

Here are highlights from the final week of testimony:

Dr. Martin Tobin, a pulmonologist who testified last week, returned to the stand Thursday for the prosecution in a short rebuttal against a defense medical expert.

The state sought to counter the testimony of a forensic pathologist who told the jury Wednesday that Floyd’s cause of death was “undetermined.” Floyd’s underlying heart issues were the main causes, the pathologist said.

Dr. David Fowler, who retired as Maryland’s chief medical examiner at the end of 2019, introduced a novel defense argument: Carbon monoxide from the squad car’s exhaust may have contributed to Floyd’s death. Fowler admitted no data or test results could back up his claim.

Tobin, in a short rebuttal, told the jury the carbon monoxide theory is proven wrong by a different blood test that showed Floyd’s blood oxygen saturation was 98%. That meant his carbon monoxide level could at most be 2% — within the normal range.

The defense’s turn before the jury came Tuesday when the prosecution rested after calling 38 witnesses over 11 days.

The state has maintained that Chauvin used excessive and unreasonable force when he kneeled on Floyd’s neck and back for nine minutes and 29 seconds last May. The prosecution relied heavily on multiple videos of Chauvin’s actions, analysis by policing experts, and medical testimony determining Floyd died due to the restraint.

The defense presented seven witnesses to bolster its three-prong strategy for clearing the officer of culpability: Floyd died from drug and health problems; Chauvin’s use of force was ugly but appropriate; and a hostile crowd of bystanders distracted the former officer.

At the heart of defense attorney Eric Nelson’s case is the argument that medical reasons, not Chauvin’s actions, caused Floyd’s death that evening. In other words, Floyd’s use of methamphetamine and fentanyl, his initial resistance to officers and preexisting heart problems all conspired to kill him.

“Their goal was to throw a bunch of arguments out there and hope that something resonated with the jurors, but I just think it’s too much to overcome with that video,” CNN legal analyst Jennifer Rodgers said. “Their witnesses I think were not as strong as the prosecution. The cross examination was very effective.”

Fowler testified that a sudden heart issue — not the police restraint — killed Floyd.

Floyd had narrowed coronary arteries, known as atherosclerosis, according to Fowler. His heart was enlarged due to his high blood pressure, or hypertension.

Fowler also testified that Floyd’s fentanyl and methamphetamine use, exposure to the squad car’s exhaust, and a tumor known as a paraganglioma also contributed.

Hennepin County Medical Examiner Dr. Andrew Baker, who performed Floyd’s autopsy last May, had previously testified for the prosecution that Floyd’s death was a “homicide.” The cause of death was cardiopulmonary arrest — Floyd’s heart and lungs stopped. That occurred during “law enforcement subdual, restraint, and neck compression,” the doctor testified.

Baker said the paraganglioma was an “incidental” tumor that didn’t factor in his death.

But Baker told the jury that other “significant conditions” contributed to Floyd’s death, including hypertensive heart disease and his drug use. Some of Floyd’s blood vessels were severely narrowed, and Baker testified that he did not find evidence at autopsy to support a finding of asphyxia.

The Hennepin County medical examiner said Floyd’s blood had about 11 nanograms of fentanyl per milliliter — more than in some overdose cases Baker has seen.

Barry Brodd, a former police officer and use-of-force expert called by the defense on Tuesday, testified that Chauvin was justified in kneeling on Floyd for more than nine minutes and did not use deadly force.

“I felt that Derek Chauvin was justified and was acting with objective reasonableness, following Minneapolis Police Department policy and current standards of law enforcement in his interactions with Mr. Floyd,” Brodd told the jury.

Brodd said he did not consider putting a handcuffed Floyd in the “prone control” position on the street to be a use of force. In fact, he suggested, it was safer for the person because if they get up and fall they might hurt their face.

“It doesn’t hurt,” Brodd said. “You’ve put the suspect in a position where it’s safe for you, the officer, safe for them, the suspect, and you’re using minimal effort to keep them on the ground.”

Brodd’s testimony was at odds with the prosecution’s policing experts and Minneapolis Police Chief Medaria Arradondo, who said Chauvin’s actions were “in no way, shape or form” within department policy, training, ethics or values.

On cross, Brodd said that he doesn’t consider the prone control position to be a use of force because it does not cause pain.

Prosecutor Steve Schleicher showed Brodd a still image of Chauvin’s knee digging into Floyd’s neck. He asked whether that position might cause pain. Brodd said it “could,” so Schleicher asked him if that means Chauvin’s action was a use of force.

“Shown in this picture, that could be a use of force,” Brodd said.

Brodd admitted he was not specifically aware of Minneapolis Police Department’s definition of force, which defines it as a restraint that causes injury or pain. He also acknowledged that putting someone in the side recovery position is simple and quick.

At one point, Brodd said Floyd was resisting officers for a “couple minutes” after being taken to the ground. Prosecutors played several video clips of Chauvin kneeling on Floyd. Brodd then admitted he wasn’t sure if Floyd was struggling with police or writhing on the ground.

“I don’t know the difference,” he said.

Other defense witnesses testified about Floyd’s drug use, particularly during a prior arrest in May 2019 in which he ingested opioids as police approached him in a vehicle.

Juror deliberations begin next week in a Minneapolis metropolitan area reeling from other police-involved deaths, including the police shooting of Daunte Wright last weekend. Brooklyn Center police Officer Kim Potter has been charged with second-degree manslaughter in the shooting of the Black motorist following nights of protests.