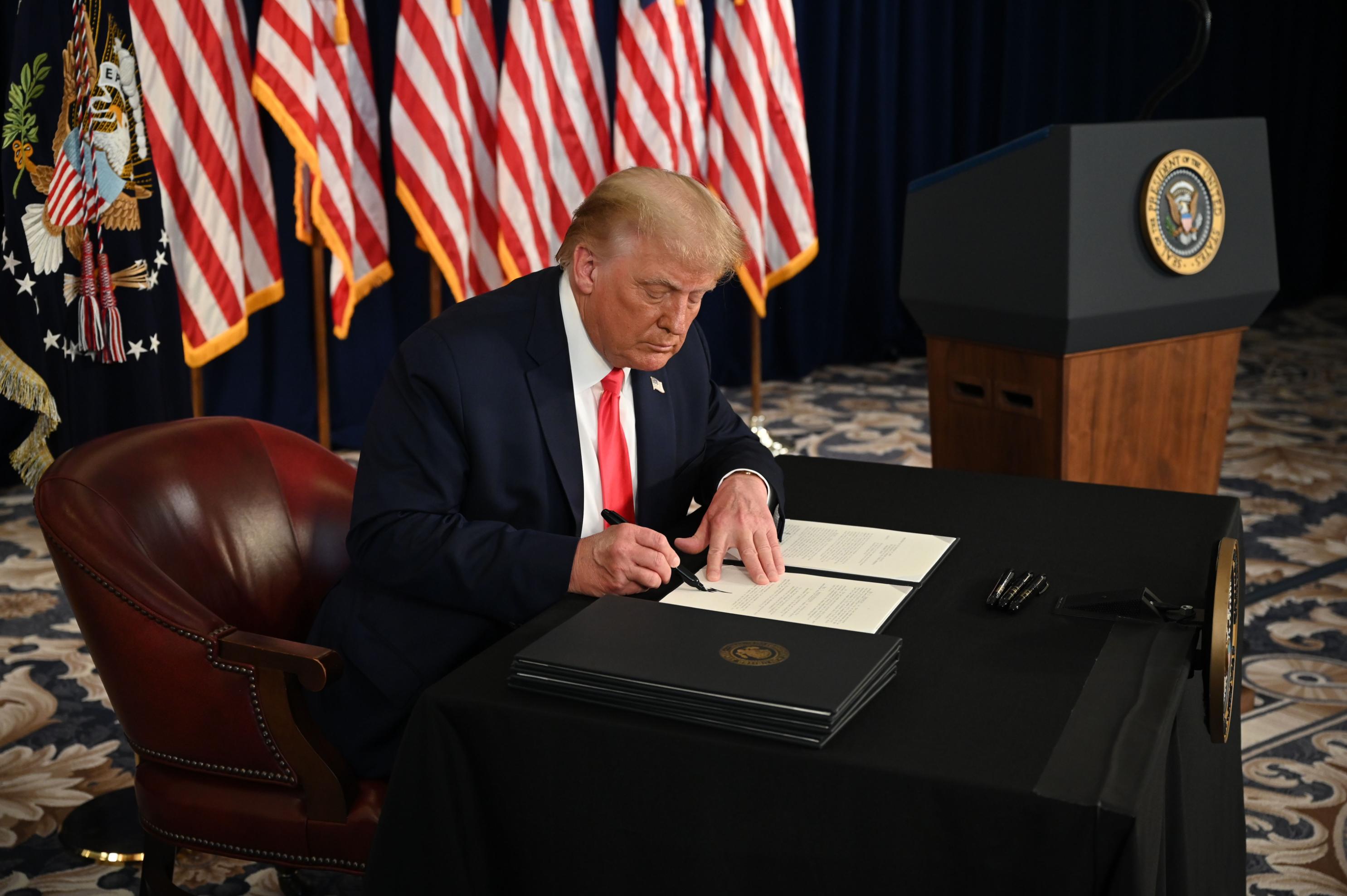 States can count their existing payments toward their $100 match of unemployment benefits under the plan announced by President Donald Trump on Saturday, according to a Department of Labor guidance obtained by CNN.

That would effectively limit the total federal boost to just $300, only half of what jobless Americans had been getting under the pandemic relief package provision approved by Congress last March that expired July 31.

With negotiations on a new deal stalled, Trump unveiled an executive action that would provide the unemployed $300 a week under a new “lost wages assistance” program, but only if states first agree to put up an additional $100 a week — which the President cited as a total benefit of $400 a week.

Many states, however, are already facing severe budget shortfalls and would unlikely be able to do so.

On Sunday, the Department of Labor offered another option: States can count their existing weekly unemployment payments as their cost share requirement.

“This option requires no new expenditures of state funds beyond what the state would already be paying out from state funds in regular unemployment compensation benefits,” the email said.

The department is, however, still encouraging states to use their share of their $150 billion in federal coronavirus relief funds to meet their match requirement. But states say they need even more and have been petitioning lawmakers for months to provide an additional $500 billion to help them address the major loss in tax revenue they are experiencing because of the coronavirus pandemic.

It’s unclear what the department’s guidance means for the roughly 13 million people receiving pandemic unemployment assistance, a temporary program that Congress authorized in late March to provide benefits to those who don’t typically qualify for state jobless payments, such as gig workers and the self-employed.

The same goes for the roughly 1.1 million people claiming benefits under the pandemic emergency unemployment compensation program — which temporarily provides an additional 13 weeks of payments — that lawmakers also created in late March. Both these programs are fully funded by the federal government, not state unemployment programs.

And it’s unclear whether laid-off Americans who receive less than $100 in state benefits could get the $300 federal boost. About 10% to 15% of claimants fall into this category, according to Andrew Stettner, senior fellow at The Century Foundation.

Budget watchdogs are also questioning how long the federal government can fund its share of the enhanced benefits. Trump’s action called for redirecting $44 billion from the existing Disaster Relief Fund to create the new lost wages assistance program. The enhanced benefits would go through the first week in December or until the Disaster Relief Fund balance reaches $25 billion, whichever comes first.

The Committee for a Responsible Federal Budget estimates that the lost wages assistance program would have enough funds to last five weeks, through Aug. 29.

Some experts remain skeptical that this program will ever go into effect, in part because it likely requires states to set up a new system to launch it. Also, it’s expected to generate legal challenges.

“I don’t see how anyone actually realizes this benefits absent the Department of Labor or FEMA finding some loophole in the current legal structure,” said Michele Evermore, senior policy analyst at the National Employment Law Project.

Separately, the committee also projects that up to $150 billion in payroll tax payments could be delayed under another action unveiled by the President Saturday.

Trump said that the employee portion of these levies — 6.2% for Social Security and 1.45% for Medicare — would not have to be paid until the end of the year for workers making less than about $104,000 annually.

But it’s not clear how many employers would chose to defer withholding the taxes since it would still be owed later.

Trump said that if he’s re-elected, he would push to forgive the deferred payroll taxes — though Congress holds the power over taxes. Also, that would further weaken the already shaky finances of Social Security and Medicare.