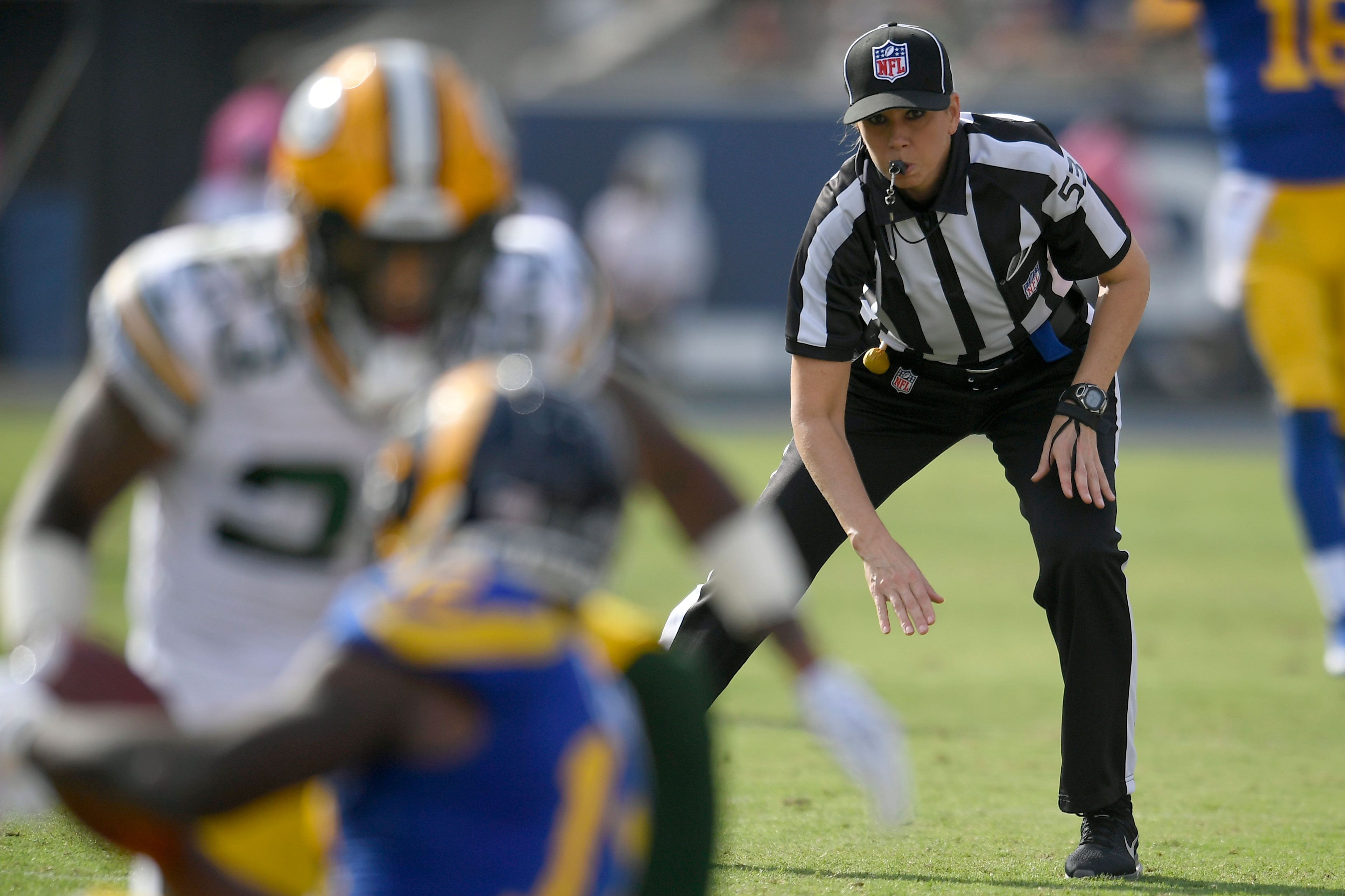 Andra Day’s Grammy-nominated 2016 hit ‘Rise Up’ has been featured in television shows and commercials — it was played on the campaign trail by Hillary Clinton and performed at the inauguration of President Joe Biden — but in a Tampa hotel room in February, the song had an audience of just one.

Sarah Thomas had deliberately loaded it onto her playlist and she became emotional. “You’re broken down and tired of living life on a merry-go-round,” Day sings, “But I promise we’ll take the world to its feet and move mountains.”

“It just impacted me so strongly that morning,” the 47-year-old told CNN. “Every word of that song has meaning to my journey.”

An hour later, Thomas left the hotel and went to the Super Bowl. That night, she was sharing the stage with Tom Brady, the Lombardi Trophy and over 100 million people watching worldwide.

And another glass ceiling had been shattered.

‘Go out for the boys team’

When she was growing up in Mississippi in the 1970s and 80s, Thomas says it never occurred to her that there was any such thing as ‘a glass ceiling,’ that there were unseen barriers which would stymie the ambition of women or minorities.

“I never thought of my gender, that I couldn’t do something because I was a girl or what I looked like,” she said. “My dad always told me not to depend on anybody for anything and that I could do whatever I set my mind to.”

Thomas described herself as a tomboy, always hanging out with her older and younger brothers, playing football, baseball and riding dirt bikes. While her early career goals were to get into the legal profession, she was never very far from sport — it was in her blood.

Thomas’ aunt was the basketball coach Jill Upton, who led the American women’s team to Moscow and a silver medal at the World University Games in 1973.

When Sarah was in fifth grade at school, Upton asked her niece if she was interested in playing basketball herself. “I said ‘I don’t have a girls’ team.’ She said, ‘Go out for the boys’ team.’ And I did.”

Thomas says she became the first girl to play in the Pascagoula City League, playing through middle and high school. That led to a scholarship at the University of Mobile in Alabama, where she remains one of the top five players in the history of the school.

“I absolutely love playing basketball. I love sports, as you can well imagine!”

Upon graduation, Thomas pursued a career in law and subsequently moved into pharmaceutical sales, but basketball was never far away. That was, until the day it was cruelly snatched away from her.

Thomas had been playing in a church league for three years when a decision was made that altered the entire trajectory of her life. “The guy came up to me and he said, ‘I’m sorry about what happened last night.'”

Thomas was 23 years old, single, and had been home alone the previous evening; she had no idea what he was talking about. “And he goes ‘You really don’t know, do you? They kicked you out of the league last night. Because you’re a girl.'”

She soon learned that another player had raised an objection to competing against a female, a vote had been taken, the vote was a tie and the preacher had cut her from the league.

According to Thomas, the objecting player had said, “When she posts us up or I post her up, it just feels funny.” She had little sympathy for his argument, putting words around a situation that nobody else had the courage to say.

“I said, as fast pace of a game as basketball is, if you get some type of sexual sensation out of it, you don’t need to be in this game.” She realized that by deploying such graphic imagery, she’d helped to seal her own fate, “You can just imagine, in the Baptist Church, and I said, ‘sexual sensation.’ I was too history anyway.

“I got in my car, I called my dad and I was crying. I was so mad,” Thomas remembers. “I was like, ‘You have to be kidding me. I’ve played sports my entire life and because I’m a girl, I can’t play.’ For the first time in my life, I was sports-less.”

‘They treated me like an official, not a female official’

Thomas can’t remember the first time she watched a Super Bowl; football was just such an intrinsic part of her life from a very early age. When CNN asked what she would have said if somebody had told her back then that she could be a part of it one day, she enthusiastically declared, “Sign me up!”

As fate would have it, the closing of one door led to the opening of another. Sarah’s brother was going to a football official’s meeting and she asked if she could tag along. “I guess so,” he said. “Be there at 6. Don’t be late.”

“And so, I walked into that room full of men and the gentlemen at the front just looked and watched. To break the ice, I said, ‘Is this where you become a football referee?’ I can’t repeat what he said, but he [basically] said, ‘I guess so.'”

In that moment, the life arc of Sarah Thomas was launched on a totally different trajectory, one that would challenge stereotypes and shatter norms.

“They treated me like an official, not a female official, but an official. And if they had not shown me the ropes at that young age, I would not be where I am today.”

Thomas worked her first varsity high school game in 1999 and by 2006, she was appearing on the NFL’s radar. She was invited to an official’s camp by Conference USA’s official’s coordinator Gerry Austin, “Thank goodness he did,” Thomas mused. “It changed the course of my life.”

She impressed at the camp, and in 2007, she made history by becoming the first female official in a major college football game.

It took her a while to realize that she was making history, though. “I was taken aback. When I started, I did not know that there weren’t any women because there were women officials officiating my basketball games.”

As Thomas progressed in her career, more history was made; she became the first female to referee in a Big Ten stadium — as a line judge for Northwestern University against Rice University in ’07.

In 2015, she became the first permanent female official in the NFL, making her league debut that September between the Houston Texans and the Kansas City Chiefs in Houston. A year later, she showed her mettle when she was injured in a collision during the Vikings-Packers game but returned to finish up with a broken wrist.

In 2019, she was the first woman to wear the zebra stripes in a playoff game, and in 2021, having successfully managed to avoid contracting Covid-19, Thomas finally made it to the Super Bowl.

The NFL’s Executive Vice President of Football Operations, Troy Vincent, Sr., celebrated her achievement, saying, “Her elite performance and commitment to excellence has earned her the right to officiate the Super Bowl. Congratulations on this well-deserved honor.”

The following week, Thomas was still buzzing at the memory of it. “It was remarkable,” she told CNN.

“The one great thing about being an official is the guys that I get to be around are so professional and they are just an elite group. There was such a peace and calm; that crew was amazing.”

Not a novelty, but the norm

Very few referees or officials want to be the center of attention — typically, the fans will only know your name if you’ve made a bad call and ended up in the news — and Thomas was no different. She was just hoping to stay under the radar throughout the course of her career.

But in the second game of her second season in the NFL, she realized that her mere presence on the sideline was changing the world.

“A coach comes up to me and said, ‘I just want to thank you for what you’re doing.'” He went on to explain that the impact she’d been making was seismic.

“He said ‘I’ve coached in this league for a long time and I have two daughters, and they think they know more about football now because of you, not because I’m their dad and the coach.’ That’s when it hit me.”

Super Bowl LV was also groundbreaking because, for the first time ever, two of the winning coaches were female. The Bucs’ defensive line assistant Lori Locust and the strength and conditioning coach Maral Javadifar advanced the metaphorical ball from 2020, when the 49ers’ Katie Sowers had become the first woman to coach in the Super Bowl.

In this context, it’s perhaps merely a footnote that Tom Brady won his seventh Lombardi Trophy — more than even the most successful franchises.

Thomas says she found Locust before the game and Javadifar afterwards, hugging and thanking each other for what they have achieved. Thomas told Javadifar that, hopefully soon, such trailblazing won’t be a novelty — it will be the norm.

But the impact of their progress goes way beyond football and sport. The sight of three successful women sharing the spotlight with the top male athletes, in the biggest game of the year, is inspirational to girls and women everywhere.

Thomas says it’s just as important, though, for young men to recognize those achievements and strive for equality in society. The moral of her 25-year journey is relevant to her daughter, naturally, but also her two sons.

“I want them to respect their spouse, their partner, girlfriend. She’s an equal with you. You respect her. She’s out there working just as hard as you are.”

Certainly, her sons have the utmost respect for their mom, with one texting Thomas after the game to declare her ‘the GOAT’ (greatest of all time).

READ: For the first time, women have won the Super Bowl as coaches

‘We’ll rise up, a thousand times’

Sarah Thomas knows that her life journey hasn’t always been straightforward or the most pleasant at times, but she wouldn’t change one bit of it.

Asked what she’d say now to the preacher who cut her from the men’s basketball league, Sarah explains she still sees him occasionally. “Every time I see the preacher,” she laughs, “I hug his neck.”

“I have no ill will towards anyone like that. God closes the door, but then he’ll open up three of them for you. I would say, ‘Thank you.'”

Having scaled the mountain as an NFL official, she’ll be ready to go again next season and compete to be the best in her position. A new chapter begins in March, after a spot of rest and relaxation “somewhere warm and tropical.”

And when she does, Andra Day could well be providing the soundtrack again: “We’ll rise up in spite of the ache; we’ll rise up, and we’ll do it a thousand times again. For you.”