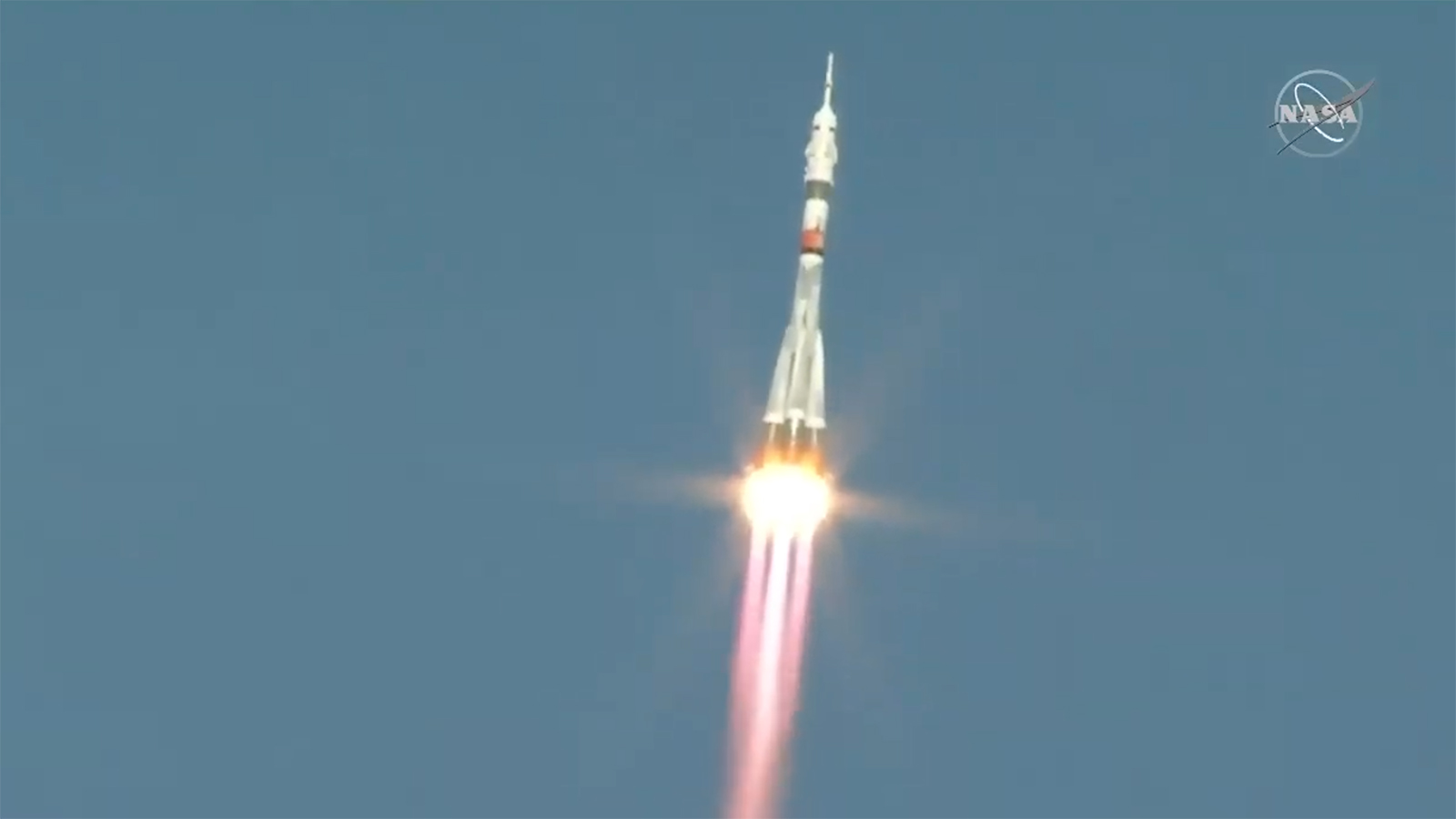 Just a few weeks ahead of the 20th anniversary of a continuous human presence in space, NASA astronaut Kate Rubins and Russian cosmonauts Sergey Ryzhikov and Sergey Kud-Sverchkov launched for a stay on the International Space Station.

The launch from the Baikonur Cosmodrome in southern Kazakhstan occurred at 1:45 am ET on Wednesday.

The trio’s Soyuz capsule docked with the space station at 4:48 a.m. ET. An “ultrafast” rendezvous system helped deliver the crew to the station after just two orbits around the Earth “for the first time in history,” according to Roscosmos, Russia’s space agency.

The hatch between the space station and the capsule opened at 7:07 a.m. ET, allowing them to enter the station.

This is the second spaceflight for Rubins and Ryzhikov and the first for Kud-Sverchkov, and they will spend six months on the space station.

Along for the ride is Yuri, a little cosmonaut knitted by Kud-Sverchkov’s wife Olga. He serves as the crew’s zero gravity indicator. Essentially, once he begins to float, the crew will know they’ve reached space. Each crew gets to pick their own indicator, according to NASA.

Although NASA astronauts Doug Hurley and Bob Behnken successfully launched to the station in May from the United States aboard the SpaceX Endeavour, launches to the space station on the Russian space vehicle Soyuz will still continue in the part of Kazakhstan leased to Russia.

Rubins, Ryzhikov and Kud-Sverchkov will briefly overlap with NASA astronaut Chris Cassidy and Russian cosmonauts Anatoly Ivanishin and Ivan Vagner. Cassidy, Ivanishin and Vagner will depart the station using the docked Soyuz capsule and return to Earth on October 21.

The 2nd time around

Rubins begins her second mission by launching on her birthday.

She will vote in the US presidential election from the space station, according to NASA. In fact, it’s her second time voting from space. Rubins voted in the 2016 election during her first six-month stay on the space station between July and October 2016.

But training and launching during a pandemic is a new experience for Rubins — although she’s comfortable with personal protective equipment because of her “old life,” she told CNN in September. Prior to becoming an astronaut, she was a scientist who studied viral diseases, cancer biology, microbiology and immunology.

“I started preparing for this before the pandemic during normal crew training,” she said. “When NASA shut down, I learned how to train remotely using video and software. I never thought I would train for spaceflight during a pandemic or do spacewalk training from my living room.”

Rubins was eventually able to return to training in person in Texas and Russia along with her Russian crewmates, all while maintaining distance from each other and wearing masks.

Returning to the space station will allow Rubins to check some items off her bucket list.

She was the first person to sequence DNA in space in 2016, and she’s looking forward to continuing her sequencing research in new ways by studying the microbiome, or microbial environment, of the space station.

Sequencing DNA can reveal huge amounts of information, Rubins said, so applying sequencing to the station’s microbiome can reveal a microbial picture of the space station — and how it differs from Earth. It’s a huge opportunity that may not present itself again because nothing has ever been isolated from Earth for 20 years.

Rubins is eager to use the sequence to push the limits of what they can do on the space station, as well as be involved in cell culture studies. Since her previous stay on the station, there are new high-resolution microscopes on board she can use to study cells.

“This time around, it’s all of the things on my bucket list,” Rubins said. “By waiting to return for a few years, there is new equipment on the station that will enable me to do all of these things.”

Her upcoming mission will include conducting research using the Cold Atom Laboratory on the station to study atoms as well as a cardiovascular experiment that follows up on an investigation she worked on during her first spaceflight, according to NASA.

The 20th anniversary of a continuous human presence on the space station occurs on November 1 during the beginning of Rubins’ second six-month mission.

“It’s so exciting — we’re at this wonderful time in space station history of operations for 20 years,” she said. “Inside of this incredibly capable orbiting laboratory, we can do all kinds of experiments, including physics, looking at particles and quantum mechanics, biology experiments, printing organs with tissue-like structures and all the way to human physiology.”

Rubins is also looking forward to the video downlinks the astronauts conduct with students on Earth, what she refers to as one of the “highlights on the station.” She hopes to connect remotely with classrooms and answer questions from students.

“It’s amazing to have that human connection,” she said. “I know a lot of kids are struggling at home, so hopefully we can bring a little joy to talk about space exploration.”

During their stay, these astronauts will also be joined by the SpaceX Crew-1 flight, bringing the total astronauts on the station to seven.

Crew-1 is going through system checks on Earth. It has more capabilities than Endeavour and will be able to dock on top of the space station.

Currently, NASA is targeting a launch by early-to-mid-November.

“It’s going to be incredible to have seven people on the space station,” Rubins said. “It’s designed to handle that. We’ve been preparing for this the last few years by enhancing the scrubbing of carbon dioxide and testing new technology for exploration. Seven crew members aboard allows us to test new atmosphere revitalization and new spacesuit components. We can really increase our science output.”