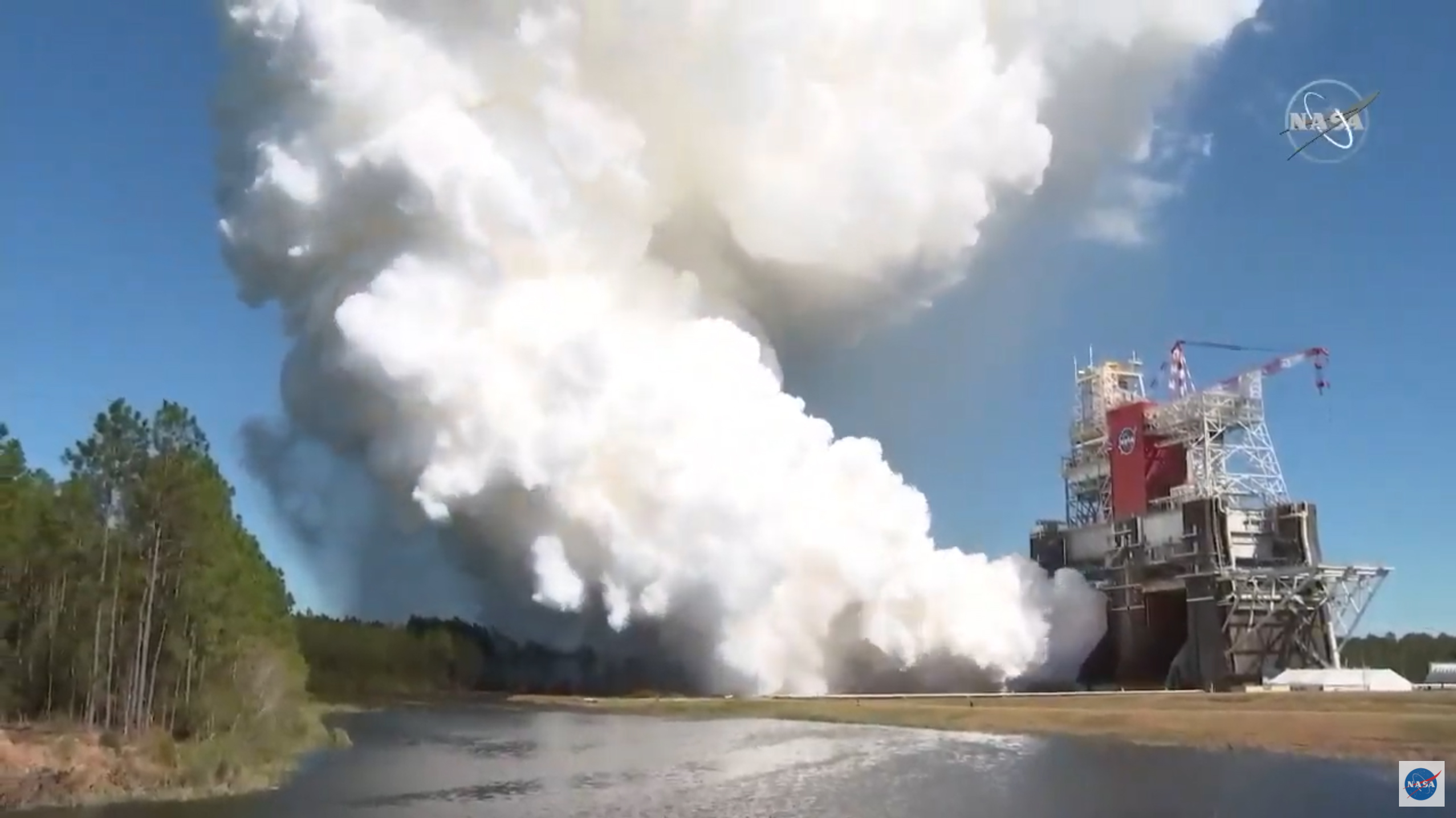 The Space Launch System rocket that will launch NASA’s Artemis astronauts into space on their way to the moon went through a final and successful hot-fire test of the core stage on Thursday.

“The SLS is the most powerful rocket NASA has ever built, and during today’s test the core stage of the rocket generated more than 1.6 million pounds of thrust within seven seconds. The SLS is an incredible feat of engineering and the only rocket capable of powering America’s next-generation missions that will place the first woman and the next man on the Moon,” said acting NASA Administrator Steve Jurczyk in a statement.

“Today’s successful hot fire test of the core stage for the SLS is an important milestone in NASA’s goal to return humans to the lunar surface — and beyond.”

This was the eighth and final in the Green Run series of tests designed to ensure that the rocket can launch Artemis missions that will land the first woman and the next man on the moon in 2024. The first mission, the uncrewed Artemis I, is scheduled for November. These tests can help answer questions about how the rocket might perform throughout different stages of launch.

The rocket’s core stage systems were loaded with more than 700,000 gallons of supercold propellant and the four RS-25 rockets were fired at the same time. This simulates what the rocket will endure during launch, although SLS will use about 8.8 million pounds of thrust to lift Artemis I off the pad.

The core stage includes the four engines, liquid hydrogen tank, liquid oxygen tank and the avionics — computers and electronics that work in concert as the rocket’s “brains” that control the first eight minutes of flight — according to the agency.

Between 18 to 20 tanker trucks full of propellant filled six barges with the liquid oxygen and hydrogen in the days before the test. The barges were then towed to the B-2 rocket stand to fill up the core stages.

This second, longer hot-fire test was deemed necessary after the first one in January ended earlier than planned. The first hot-fire test was expected to last for eight minutes, but cut off just after one minute.

The second test lasted for eight minutes, providing the teams with the data they need. Applause could be heard from the control room after they gave the command to shut it down after eight minutes. Nothing prompted an early shutdown.

During the test, the engines experienced three different power levels as well as movements that simulate flight steering, called gimballing.

In the weeks before the test, teams made sure that a liquid oxygen pre-valve that had to be repaired was working. They also analyzed data from the first test, including the parameters on the flight computer that ended the first test earlier than planned. And they made minor repairs.

“This longer hot fire test provided the wealth of data we needed to ensure the SLS core stage can power every SLS rocket successfully,” said John Honeycutt, manager for the SLS Program at NASA’s Marshall Space Flight Center in Huntsville, Alabama, in a statement.

The Artemis program will begin with missions to the moon with a plan to rely on the SLS rocket as a way to send astronauts on to Mars as well.

Teams will continue to assess the data gathered from the test. After about a month of refurbishing the core stage and engines, the Pegasus barge will carry the core stage on to its next home.

The SLS rocket will be shipped to NASA’s Kennedy Space Center in Florida so it can be assembled and integrated, along with the Orion spacecraft designed for the astronauts.

At Kennedy, teams have already stacked the solid rocket boosters in the Vehicle Assembly Building for Artemis I.

Jurczyk said Thursday that the Biden administration has been supportive of NASA and its objectives and goals for the Artemis program and the agency’s Moon to Mars strategy.

Returning to the moon

The first 18 astronauts of the Artemis program were selected and announced in December.

When astronauts explore the lunar south pole, which has never been visited by humans before, they will build on the legacy and science gained during the Apollo program and carry it into a new century.

After the uncrewed Artemis I flight in November, Artemis II will be a crewed flyby of the moon in August 2023. Artemis III will return astronauts to the moon.

The SLS rocket will send Orion, astronauts and large cargo to the moon all at once, NASA said.

Orion will dock at the Gateway, a planned lunar outpost that will orbit the moon. About 250,000 miles from Earth, the Gateway will allow easier access to the entire surface of the moon and, potentially, deep-space exploration.

The Artemis III Science Definition Team has identified several priorities for this groundbreaking team of Artemis astronauts. These include conducting experimental science on the moon, investigating and mitigating the risks of exploration, and understanding the origin of the elements at the lunar poles — like water and other resources that could be used by astronauts.

The agency also wants to establish an Artemis Base Camp by the end of the decade at the lunar south pole.