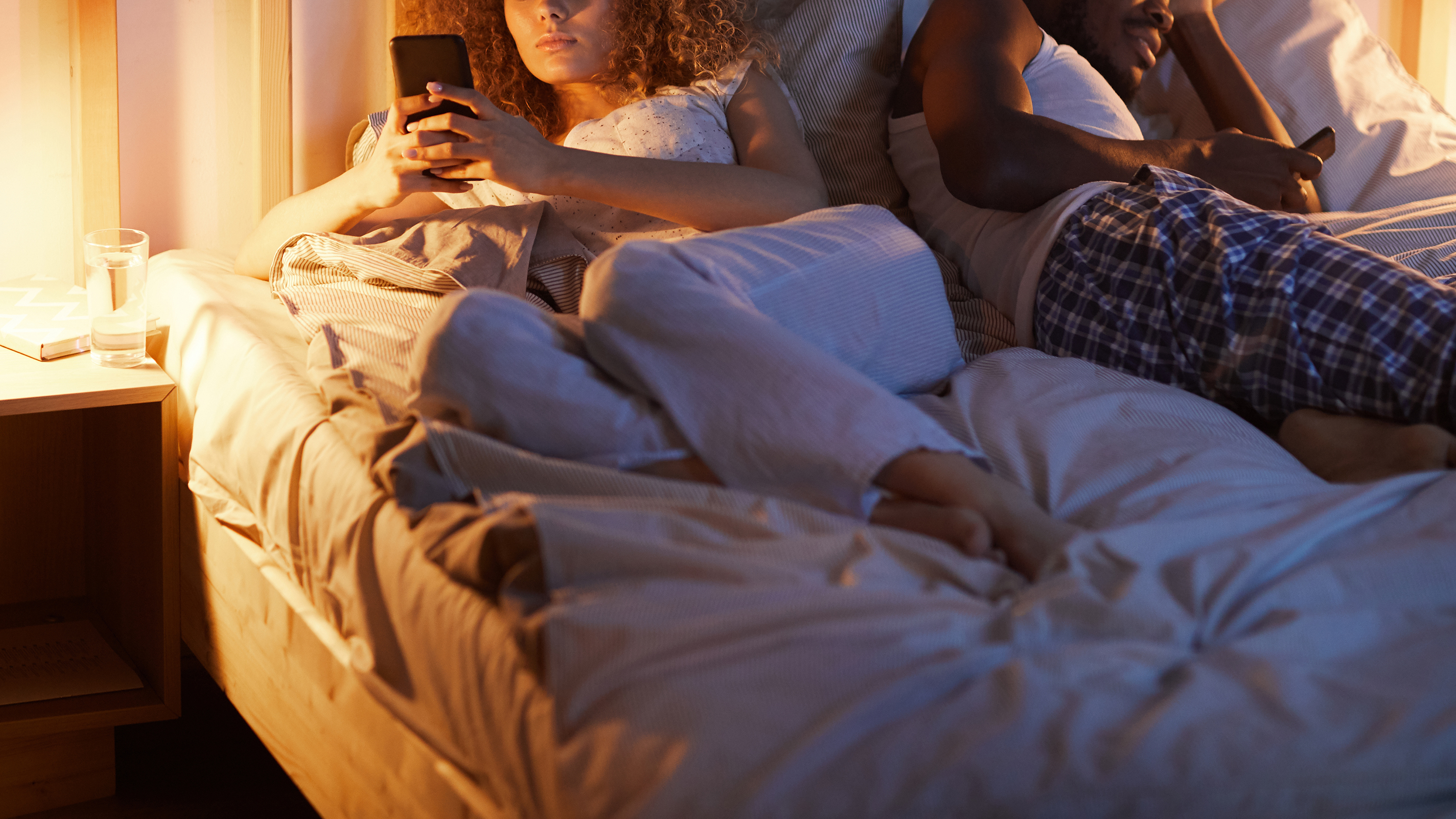 When the pandemic hit, couples found themselves worrying about getting sick, losing income, teaching their children at home while working full time (or worrying full time about sending them to school).

It hardly makes a perfect recipe for sex.

The stress has been too much for one Texas couple in their mid-40s with two children, according to one woman who did not want to be named due to the sensitive nature of the story, given her high-profile job in Austin.

“I stopped exercising because I was too scared of the plague ravaging society,” she said.

“While scared and doing nothing, I threw my back out and couldn’t move for two weeks,” said the woman, who now works her informational technology job from home alongside her husband.

Then her husband had a non-Covid health issue that “doused any embers that may have survived all of our lockdown trauma.”

Covid-19 has invaded nearly every aspect of our lives. So, it’s no surprise it’s infiltrated our bedrooms, too — for better or worse.

Many people are reporting challenges in their sex lives and relationships, according to early findings from the ongoing Sex and Relationships in the Time of Covid-19 study undertaken by Indiana University’s Kinsey Institute, which researches issues related to gender, sexuality and reproduction.

What the sex surveys say

The results are a mixed bag so far, said Justin Lehmiller, a research fellow at the Kinsey Institute and the author of “Tell Me What You Want,” a book about the science of sexual desire.

The study kicked off mid-March, and researchers initially heard back from roughly 2,000 respondents — 75% of whom were Americans and 25% were from other countries — between the ages of 18 and 81 in varied relationships. Almost 53% of the participants identified as heterosexual, almost 20% as bisexual and the rest as: queer, pansexual, gay/lesbian or other.

About 44% of participants reported a decline in the quality of their sex lives, with 30% reporting a decline in their romantic lives, according to early findings from the longitudinal study, which is in its sixth wave and will continue for several more months.

Some 14% said their sex lives had improved, he said, and 23% reported their relationship was in a better place.

When people are going on vacation and have more free time, there’s usually more sexual activity. But the most recent wave of data collection from this summer indicated our sex lives have not yet rebounded to the levels of past summers. “This summer really seems to be the exception to that peak,” he said.

Declining quality of one’s sex life often correlates with higher levels of stress, according to Lehmiller.

“We know that stress comes from a lot of different sources, it’s complex and multi-factorial,” he said. “The more stressed people reported feeling, the less desire for sex.”

That’s true even when business is good. For Marcus Anwar, 31, working long hours in Toronto running OhMy — the classified advertising website he founded in 2017 — appears to be taking a toll on his sex life with his fiancee. With everything moving online, OhMy’s revenue has tripled its revenue since the pandemic began, he said, but that has meant less free time for the couple.

“There are days I am working 14 to 16 hours. Having the weekend off is a thing of the past,” Anwar said. “When I’m done working, I try to spend quality time with Tiffany. But unfortunately, there are constant calls and emails that I have to answer, making it very difficult to separate work from personal life.”

“Even though we’ve been together for so many years, it just hasn’t felt like it used to, when we both wanted to be having sex,” said Tiffany, 29, who declined to give her last name for privacy reasons. “(Back) when there weren’t a million things we had to worry about or have to get done.”

Talking about sex is difficult

Diana Wiley, a Seattle-based certified sex therapist and licensed marriage and family therapist, told CNN that talking about sex can be very hard.

“Some people are so stressed they’ve just kind of folded up their tents about sex, they don’t want to do it,” said Wiley, whose book, “Love in the Time of Corona,” shares tips for reconnecting sexually and emotionally in troubling times.

Wiley suggested a few ways for couples to try to get their sex lives back on track in pandemic times, including tips for full-body caressing exercises that begin with nonsexual touch to help release stress.

Being more mindful in the bedroom and in general, she said, can also be beneficial.

“Take control of your thoughts rather than let your mind send you into a tailspin,” she said, “It helps to name what’s true right now, in this moment — my family and friends are healthy, for example.”

And if you have to put sex on the calendar, do it. “It’s a myth for sex to be any good it needs to be spontaneous,” she said.

Some are having more intimate sex

According to the Kinsey Institute’s early findings, not everyone is folding up their tents, however.

For Bob Curley of Rhode Island and his wife, who had recently gone back to grad school, the couple of over 30 years had adapted to her being away from home more often.

“Initially, there was a lot of stress around the pandemic that didn’t put us in an amorous mood,” Curley told CNN. “But once we got used to it, we really started enjoying having the extra time together.”

Their communication improved in and out of the bedroom, he said.

“The sex may not have increased significantly in terms of frequency, but the intimacy definitely has,” said Curley, adding that the couple took the opportunity to “push some sexual boundaries together in a way we might not otherwise have found the time or energy to do.”

The Kinsey study backs him up, with one in five people trying at least one new sexual activity since the pandemic began, said Lehmiller, including things like trying a new sexual position, sexting or sending nude photos and sharing or acting on sexual fantasies.

“This period in time has been a sexual revolution for many people,” he said, adding that people who are trying new things were three times more likely than those who aren’t to report improvements in their sex lives.

For single people considering new relationships during the pandemic, feelings of isolation are often compounded with health concerns about Covid-19, said Jenni Skyler, a certified sex therapist and director of The Intimacy Institute in Boulder, Colorado.

“I see a lot of people taking this as an opportunity to connect online and cultivate emotional intimacy first before jumping to something physical,” she said.

Such was the case for 34-year-old San Diego resident Jackie Bryant, who pens a monthly newsletter about cannabis culture. Until recently, she said she had been perusing dating apps but not meeting anyone in person due to the health concerns of the pandemic.

“I’ve been much more choosy, talking to a number of people, trying to be open-minded, but not agreeing to see anybody unless it seemed really promising,” Bryant said. “There’s this very real layer of death and sickness tied to human intimacy now.”

The pandemic made “me drill down on what I was looking for even more,” she said. “Am I going risk my life for some chump? … not anymore.”

During a recent socially distanced second date that ended with an awkward but cute moment when saying goodbye, Bryant said, she and the man navigated their personal safety rules. “I was like, ‘For you I don’t have rules,'” she said. “From opposite sides of my yard, we walked toward each other and kissed.”

“I’ve decided I can’t put that part of my life on hold. I need sex, I want to be in a relationship and who knows how long this will last,” Bryant said. “You learn to navigate that within the confines of Covid.”

And how people navigate the pandemic, it seems, may have the power to lead to a sunnier sexual outcome.

“The overall emerging picture is that there are more struggles and challenges,” Lehmiller said. “But there’s a sizable number of people who really seem to be thriving during this situation, too.”