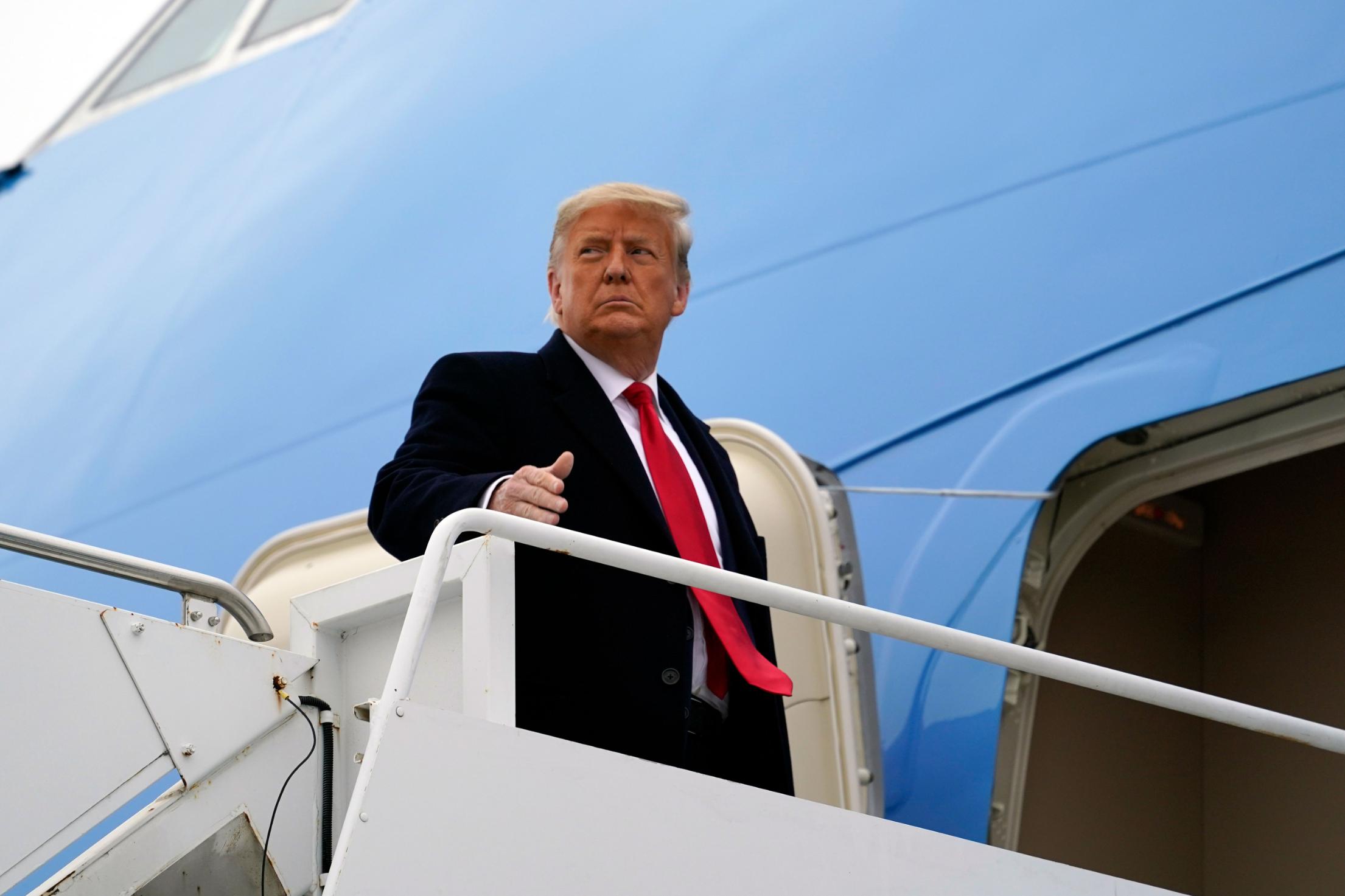 On the day he was impeached for a history-making second time, President Donald Trump lacked a comprehensive legal strategy, had nothing on his public schedule and was without his preferred social media methods of responding — in part because his son-in-law put a stop to efforts establishing his presence on fringe platforms after he was banned from Twitter.

It amounted to near-invisibility for the President at the most perilous moment of his presidency, which is ending in tumult and dramatic rebuke from members of his own party.

After the House voted 232 to 197 to impeach him — with the support of 10 Republicans — Trump released a video statement that did not mention the historic development that had occurred a few hours earlier.

Instead, he delivered a call for calm as the threat of new riots — which Trump said he’d been briefed on by the Secret Service — casts a pall over Washington.

“Now I am asking everyone who has ever believed in our agenda to be thinking of ways to ease tensions, calm tempers and help to promote peace in our country,” he said.

At the end of the spot, which was recorded by the White House and not independent television cameras, Trump decried what he called the “unprecedented assault on free speech we have seen in recent days.”

“Efforts to censor, cancel and blacklist our fellow citizens are wrong and they are dangerous,” he said. “What is needed now is for us to listen one another, not to silence one another.”

Aides had expected Trump to mostly watch the proceedings on television throughout the day. His only event was awarding the National Medal of Arts behind closed doors to Toby Keith, the “Should’ve Been a Cowboy” country star, and Ricky Skaggs, the bluegrass musician.

Trump issued a statement through the White House in the afternoon that insisted “there must be NO violence, NO lawbreaking and NO vandalism of any kind.”

But without Twitter, a campaign rally, a team of lawyers or Republicans willing to defend his actions, Trump weathered the historic shaming in subdued fashion.

That’s a distant cry from the first time he was impeached, when aides organized a campaign rally in the aptly named Battle Creek, Michigan, to coincide with the House vote.

At the rally, which occurred at the same time members were impeaching him, his press secretary emerged in the crowd to hold up a placard displaying the vote total.

“We got every single Republican (to vote) for us!” Trump crowed when he saw the final tally, adding at another point: “It doesn’t really feel like we’re being impeached.”

That is not how it feels this time. A handful of Republicans voted to impeach him, including Rep. Liz Cheney, the No. 3 House Republican. Senate Majority Leader Mitch McConnell is said to believe impeachment will help oust Trump from the GOP for good. According to a person familiar with his reaction, Trump was particularly incensed Tuesday night by Cheney’s announcement, which said he’d betrayed the office of the presidency.

While other Republicans opposed impeachment because they said it was “divisive,” most did not defend Trump on the merits of what he was being impeached for: inciting an insurrection.

Trump’s venues for responding to the impeachment were similarly limited. Ordinarily, aides would look to Twitter for the President’s first response to being the only president in history to be impeached twice. So, too, would Republican members of Congress fear what might appear on Trump’s feed if they decided to break with him and vote for his impeachment.

But Trump’s account has been permanently suspended — and with it his principal weapon for ensuring GOP loyalty.

While Trump has railed against his suspension, telling reporters this week that free speech was under assault, CNN has learned of a new effort by one of his top advisers to keep him from emerging on fringe platforms in place of the major ones he was banned from.

Trump’s son-in-law and senior adviser Jared Kushner intervened when other officials tried restoring the President’s social media presence on sites that are often havens for extremists, such as Gab, following an unprecedented ban from several major platforms.

According to an outside adviser and an administration official, Kushner and deputy chief of staff Dan Scavino blocked efforts by other aides, including personnel chief Johnny McEntee, to get the President on fringe social media platforms after he was suspended in some fashion from almost every major one, including Twitter, Facebook and, now, YouTube.

Those officials had initially attempted to use other Twitter accounts, including those run by campaign officials, to tweet in Trump’s name.

Without Twitter, Trump has turned to more traditional methods of communication. On Wednesday, as more Republicans came forward to say they would vote to impeach Trump, the President issued a statement through his press office calling for no violence “amid reports of more demonstrations.”

“That is not what I stand for, and it is not what America stands for. I call on ALL Americans to help ease tensions and calm tempers. Thank You,” Trump wrote in the 270 character statement, which would have fit neatly into a tweet.

Lawmakers and senior aides had been pleading with Trump to issue a statement saying as much while bracing for more members of his own party to vote against him.

The White House said in a statement this week it opposes impeachment, and Trump railed against the proceedings on Tuesday.

“It’s causing tremendous anger and division and pain far greater than most people will ever understand, which is very dangerous for the USA, especially at this very tender time,” he said during his visit to Texas. The White House statement, from deputy press secretary Judd Deere, read: “A politically motivated impeachment against a President with 12 days remaining in his term will only serve to further divide our great country.”

More isolated than ever

Trump’s second impeachment comes at a time when he has been more isolated than ever. Several of his Cabinet secretaries — the ones who haven’t resigned in protest — are avoiding him, his relationship with the vice president remains fractured and several of his senior staffers are scheduled to depart their posts this week.

Several top aides told CNN they don’t plan to delay their exit because of the President’s impeachment.

At the White House, Trump’s defenses are almost invisible.

Two sources told CNN Trump has said he is bringing Alan Dershowitz back after his stint defending Trump during the first impeachment proceedings. Trump has told people that Dershowitz’s defense of him on the Senate floor saved him during his last trial. Rudy Giuliani is also expected to be involved, though no concrete legal strategy had been cobbled together as of Wednesday morning, even though Trump was slated to be impeached within hours.

Several prominent figures from Trump’s last impeachment — including Jay Sekulow and Kenneth Starr — have declined to get involved. The White House counsel, Pat Cipollone, is also not expected to play a role, and considered resigning in the wake of last week’s insurrection. Trump has been dismissive of Cipollone for months now.

Trump has discussed issuing pardons for himself and his children with new urgency since the attack on the US Capitol, multiple sources familiar with the matter told CNN.

However, aides and allies are concerned over the public perception of a pardon following the Capitol riot, which led to the deaths of five people. Sources tell CNN there is dissent inside the West Wing from those appalled by the attack, many of whom are pushing up against a President whose main concern is protecting himself and his family.

While some aides have worked to organize events this week burnishing what remains of Trump’s legacy — such as Middle East diplomacy and deregulation — he has shown little interest.

His remarks touting border wall construction in Texas on Tuesday lasted for only 20 minutes and were overtaken by his comments blaming “anger” on the impeachment and his suspension from social media platforms.

The only other event on his schedule for this week — a Thursday Medal of Freedom ceremony honoring New England Patriots coach Bill Belichick — is off after Belichick said he would not attend.