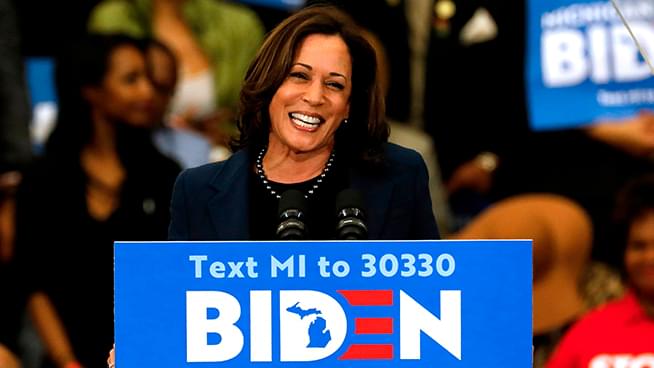 Joe Biden has announced Kamala Harris will be his running mate for the 2020 presidential race.

Harris, the only Black woman in the U.S. Senate, was elected in 2016 after serving as California’s attorney general and before that, served as San Francisco district attorney. If elected, Harris will be the nation’s first female, first Black and first Asian American vice president.

Selecting Harris, 55, provides generational diversity as Biden, 77, would be the oldest president elected in the United States history. In addition, the pick comes at a time of racial reckoning across the country as Harris has been a prominent congressional voice in the response to the death of George Floyd. The Oakland native and child of Jamaican and Indian immigrants, was inspired to attend law school after attending civil rights protests with her parents.

I have the great honor to announce that I’ve picked @KamalaHarris — a fearless fighter for the little guy, and one of the country’s finest public servants — as my running mate.

“Back when Kamala was Attorney General, she worked closely with Beau. I watched as they took on the big banks, lifted up working people, and protected women and kids from abuse. I was proud then, and I’m proud now to have her as my partner in this campaign.” Biden continued to tweet.

“You make a lot of important decisions as president. But the first one is who you select to be your Vice President. I’ve decided that Kamala Harris is the best person to help me take this fight to Donald Trump and Mike Pence and then to lead this nation starting in January 2021,” Biden wrote in an email from his campaign to supporters.

“I need someone working alongside me who is smart, tough, and ready to lead. Kamala is that person,” Biden wrote. “I need someone who understands the pain that so many people in our nation are suffering. Whether they’ve lost their job, their business, a loved one to this virus.”

.@JoeBiden has served our country with dignity and we need him now more than ever. I will do everything in my power to help elect him the next President of the United States. pic.twitter.com/DbB2fGWpaa

While Harris was in the presidential race she clashed with Biden during the primary debates. Both Biden and Harris have addressed their arguments and since she left the race, she has given her full support to the Biden campaign. She campaigned virtually for Biden, holding fundraisers and addressing causes such as racial disparities in the coronavirus pandemic. In June, she raised $3.5 million for Biden’s campaign.

“She’s been a fighter and a principled leader and I know because I’ve seen her up close and I’ve seen her in the trenches,” Biden said of Harris at a virtual fundraiser in June.

Harris tweeted her acceptance for Biden’s offer to take on President Trump and Vice President Mike Pence this November.

.@JoeBiden can unify the American people because he’s spent his life fighting for us. And as president, he’ll build an America that lives up to our ideals.

I’m honored to join him as our party’s nominee for Vice President, and do what it takes to make him our Commander-in-Chief.