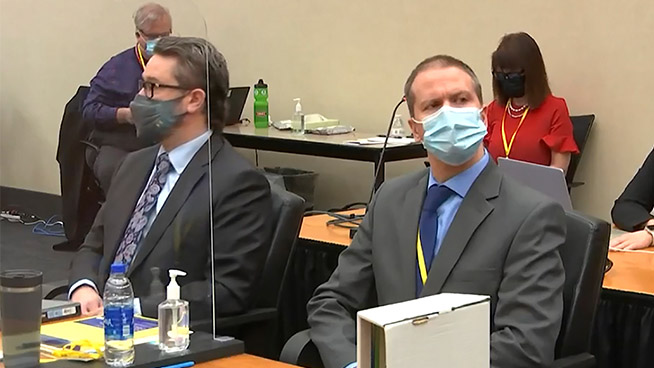 MINNEAPOLIS (AP) — The Latest on the murder trial of former Minneapolis police Officer Derek Chauvin in the death of George Floyd (all times local):

Former Minneapolis police Officer Derek Chauvin has been convicted of murder and manslaughter in the death of George Floyd, the explosive case that triggered worldwide protests, violence and a furious reexamination of racism and policing in the U.S.

The jury reached its verdict Tuesday after deliberating about 10 hours over two days in a city on edge against another outbreak of unrest.

Floyd died last May after Chauvin, a white officer, pinned his knee on or close to the 46-year-old Black man’s neck for about 9 1/2 minutes.

HERE’S WHAT ELSE IS HAPPENING:

At the Minneapolis intersection that has been dubbed George Floyd Square, about 100 people have gathered around a large painting of Floyd in anticipation of the verdict in the murder trial of former Minneapolis police Officer Derek Chauvin.

The site is located outside of Cup Foods, the convenience store linked to Floyd’s fatal interaction with Chauvin last May.

Several families with small children are among those holding vigil for an announcement from the court.

Eliza Wesley, who identified herself as a gatekeeper of Floyd Square, led those gathered in a word of prayer.

“I don’t have any doubt in you, God,” she said. “You said no weapon formed against us can prosper. … We’ve been here for 11 months. … This is the day that the Lord has made.”

The jury has reached a verdict at the murder trial of former Officer Derek Chauvin in the death of George Floyd, the Black man who was pinned to the pavement with a knee on his neck in a case that set off a furious reexamination of racism and policing in the U.S.

The verdict, arrived at after about 10 hours of deliberations over two days, was to be read late in the afternoon in a city on edge against the possibility of more unrest like that that erupted last spring.

The courthouse is ringed with concrete barriers and razor wire, and thousands of National Guard troops and law enforcement officers have been brought in ahead of the verdict. Some businesses are boarded up with plywood.